And it’s still snowing! Need I even write that anymore? Just take it as a given unless I write to the contrary! Last Monday, 25th March, was the coldest, windiest, snowiest late March day in Slovenia in over 50 years with burja winds in the Primorksa region exceeding 140kph. In some areas of the country over 5 metres of snow have fallen this winter. However, its of little comfort to know that its not just Slovenia, many countries in Europe seems to be suffering the same fate. Suffice to say that unfortunately once again I have no exciting trips to report but do bear with me, I promise as soon as it’s possible, I’ll be out there roving and reporting!

The one place I’ve been walking to, since it can easily be reached on foot from Radovljica regardless of the weather, is the village of Mošnje. In the dry months the walk to Mošnje from Radovljica via the Forest Nature Trail (Gozdna učna pot) is particularly pleasant though with the current conditions I have been going by road via the villages of Vrbnje and Gorica. The small village of Mošnje was, until 2006, a fairly unremarkable traditional farming village. However, an important archeological find was made, the remains of Villa Rustica, a Roman country dwelling dating from the 1st-4th centuries which had been until 2006, hidden deep underneath layers of earth. Since then, the local tourist organisation have created the Mošnje Archeological Path, a 1km path starting at the Cultural Centre, which leads visitors through the important sites of interest in the village to the site of Villa Rustica. 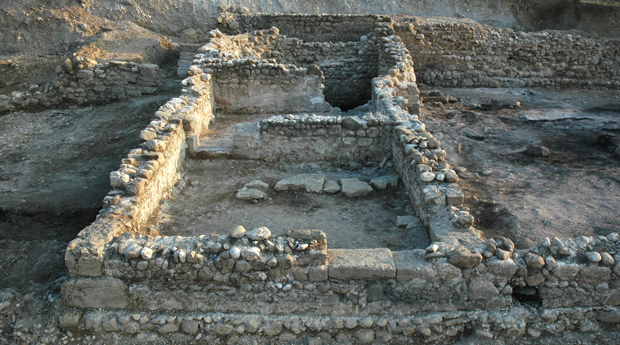 Last week I was invited to the re-opening of the Lambergh Chateau and Hotel in the village of Dvorska vas, near Begunje. The hotel, which is now under new ownership and management, comprises a modern new 4 star boutique hotel with the 11th century renovated Renaissance chateau. The new management have grand plans for the hotel and are keen to stress their intentions to be “in it for the long term.” They put on an impressive spread and invited members of the local community, who they are keen to emphasise, are very much a part of their future plans which include arranging events such as culinary evenings, wine tastings, picnics in the park etc. I met with the Marketing Manager, Helena, and we exchanged some other ideas too – an English Book Club, theme nights etc. so I’ll keep you posted on news about these, or if you’re interested in having a nose just pop in for a drink and taste their new cakes (yum!) or you can also keep an eye on their website – http://www.hotel-lambergh.com

The hotel also features a wellness area with a pool, saunas and fitness, all of which can also be used on a day basis by visitors and meeting/conference rooms which are available for hire. The hotel has beautiful grounds, including the Castle Park, and it is no surprise that they already have several weddings booked for the coming months – the wedding photos, with the Alps in the background, will no doubt be stunning. The village of Dvorska vas is just a short drive from Radovljica and Bled and the surrounding areas are ideal for all kinds of activities such as cycling, hiking, panoramic flights at the nearby airport, or just relaxing breaks.

Elsewhere in Slovenia, politicians are once again making the headlines for the wrong reasons. In what surely must be a historical first, a minister in the new coalition government, which was formed on Wednesday last week and began work on Thursday, had to resign after just 2 working days due to a scandal over an (alleged) illegal building issue (this is an issue which seems to frequently rear its ugly head here). Does anyone else have any stories to beat that one – I’d be interested to hear them?!

I spent the Easter weekend in Vienna with a friend who had flown over from the UK. As I’ve previously mentioned, that’s one of the definite advantages of living in a country that is bordered by other countries, and Vienna can be reached either by car (approximately 4 hours), by train (5-6 hours) or by plane (50 minutes) – I plumped for the latter! It was a very easy, smooth journey and with the modern fast CAT trains from the airport to the centre, you can reach the city centre within 15 minutes of leaving the airport, meaning that it’s perfectly feasible to go from Slovenia just for a day or two. There’s a lot to see and do in Vienna however the unseasonably cold weather did somewhat hamper our plans though not dampen our spirits and we nonetheless managed to see all the main sights and it was lovely to spend some time with my good friend Helen.