After a cold and wet weekend, there’s a light dusting of snow on the mountain tops this morning. However, the sky is blue and the sun is now shining once again, which is a promising start to the week.

Last weekend I went to visit some English friends who recently moved to Slovenia. I actually met this couple at the Roblek mountain hut (Roblekov dom), where I often walk, whilst they were here on holiday some years back and we have since then kept in touch. They had long dreamt about moving to Slovenia but it has taken some years for them to be able to realise that dream and finally make the move.

They have moved to a tiny village where there is little other than a handful of houses and a church. The nearest town is Mozirje, which is the largest town in the Upper Savinja valley and most known for the Mozirski gaj Flower Park, which is at its best at this time of year when the flowers are in full bloom. The park, which is open daily from the middle of April to October, is crammed full of interesting sights and exhibitions – not only flowers but also traditional Slovene beehives, a watermill, a blacksmith’s forge and the oldest house in Mozirje, which was moved to the park last year. Here’s a link to the website, although it’s currently only in Slovene but I’m on the case and hope to have that rectified very soon! I will then post the English link (and some more photos) as soon as its available – http://www.mozirskigaj.com/ 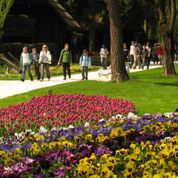 Whilst in Mozirje, I took the opportunity to have a walk (of course) and followed a short part of the Benedikt Path (Benediktova pot) alongside the Savinja river. On returning home I discovered that this is a pilgrimage path which is 90km long in total. Pilgrims used to walk the path in three stages – starting in Austria (St. Paul – Lavam) on Fridays then walking to the Slovene town of Slovenj Gradec for mass. The second day they continued to Mozirje, where they visited the Mozirski gaj and attended another mass. On Sunday they continued their journey ending in Gornji Grad.

Anyway, back to my friends which I mentioned above. The problem is, he is fine but she is feeling very isolated there in the middle of nowhere and finding life difficult with no friends or outside interests. She doesn’t speak any Slovene either which of course doesn’t help. I’m writing about this because being with them reminded me how lucky I am to live here in Radovljica where there is always something happening, here or nearby, and where everything is to hand – cinema, swimming pool, doctors surgery, shops, museums, restaurants etc.

This weekend was the 41st International Day of Minerals, Fossils and Environment (MINFOS) in nearby Trzič. This event, which is one of the main mineral exhibitions of its kind in Europe, features over 70 exhibitors from around the world. It attracts over 5,000 visitors who come to view the exhibits, join in discussions, exchange opinions and meet experts – http://www.minfos.si/index_eng.php

The next event to look forward to here in Radovljica is the new and much anticipated Pottery Festival taking place on the weekend of 25th May. Also, on Saturday 18th May in Lesce (at the Gorenjska Beekeeping Centre), there’s a Beekeepers celebration taking place with the introduction of a new ‘honey beer’ plus music and a host of other bee related things.

From now on, I’m going to endeavour to write not only about where I’ve been and recommendations for where to go, but also about forthcoming events so here are couple of other events taking place this weekend elsewhere:

Meanwhile, my parents and brother are arriving this Friday for the weekend so I’m looking forward to taking them out and about exploring – more about that next week!