Having had one of the snowiest winters ever, this was followed by the wettest May since 1975. So last week I decided to try to find a positive to the recent heavy rainfall by visiting Vintgar Gorge, which is at its most impressive following heavy rain.

Vintgar Gorge, in the vicinity of Gorje, 4kms from Bled and approximately 10kms from Radovljica, is one of the major tourist sights in the area. It is usually open from the end of April until October. During the summer months buses run regularly from Bled or it also makes a pleasant walk from Bled. Personally I prefer to walk from the village of Zasip up to the church at the Hom hill and take the path across its slopes, before following the road down into the gorge and returning up through the forest. It’s a  much longer route but its circular and I like circular routes! However, for those that don’t wish to walk so far and have their own transport, there is a large car park at the entrance to the gorge, which is also where the buses stop. The gorge is 1.6km in length and has a boardwalk throughout which ends at the Šum waterfall – http://www.bled.si/en/what-to-see/natural-sights/the-vintgar-gorge 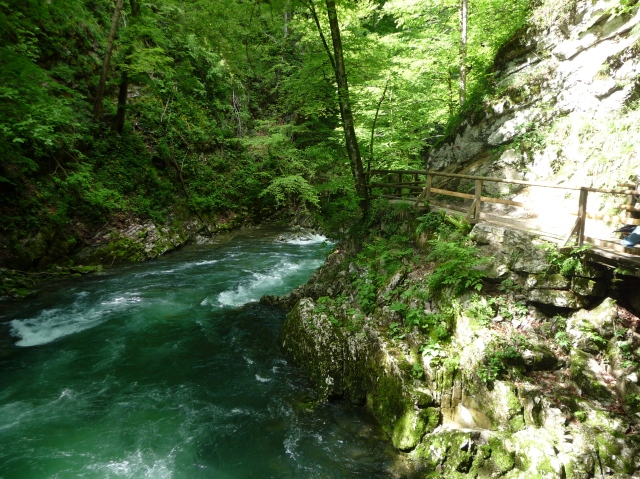 By mid-week the weather had improved and by the weekend it was positively summer-like, with the exception of a few torrential downpours and almighty thunderstorms. Sunday was forecast to be the best day of the week and so a friend and I embarked upon a rather ambitious cycle trip; ambitious in as much as she needed to be home by 12 o’clock and between here and there were a lot of kilometres and a lot of ups and downs! Our trip came about as a result of last week’s blog, where I wrote about my attempt at making Dražgoški kruhki. A friend then asked me if I had actually been to Dražgoše, to which I ashamedly replied ‘no’! So, it was time to rectify this and a visit by bike seemed the ideal way to see the best of it as one has more time to take in and appreciate the views whilst cycling.

We started from Radovljica and first travelled through the Lipnica Valley to the village of Kropa. This picturesque village is known as the cradle of Slovene iron-forging and has a centuries old tradition of ironworking and blacksmithing. It is one of the most important of Slovenia’s historic places due to its preserved architecture and technical heritage – http://www.radolca.si/en/kropa/

Kropa is a small village but a pleasant place for a stroll, to see some of the ironworks on the buildings and get a glimpse into the history of the village at the Kropa Blacksmith Museum. The museum is located in the central part of the old square, in Klinar’s House, and among its  exhibits is the only preserved iron-forge in Slovenia as well as displays of authentic materials and tools ranging from the 14th to the 20th centuries – http://www.muzeji-radovljica.si/_eng/KM-introduction.html

From Kropa we took the windy road, with seemingly countless hairpin bends, up to Jamnik (830m). The church of Saints Primus and Felician, which stands atop Jamnik, is a prominent feature of this area and can be seen from far and wide. From Jamnik we continued onwards to Dražgoše and from there down to the village of Železniki and through the beautiful Selška Valley to Škofja Loka. Then from Škofja Loka to Kranj, Naklo and back to Radovljica. The weather couldn’t have been more ideal for such a trip – hot but not scorching – with just a light breeze to keep things cool. It was a 4.5 hour ride in total with just a short stop at the war memorial in Dražgoše for a photo break as evidence that I was there (we didn’t quite make it by 12 o’clock but weren’t far behind).

Here are some forthcoming events for the week ahead in Radovljica and the surrounding areas: