It’s been another fabulous week – well at least for those of us who love the heat. Of course there are some folk moaning that it’s too hot but then most Slovenes love the winter – I’m just not one of them! The only problem I’m faced with now every morning is which of the many wonderful hiking paths or bike trips should I choose – I’m spoilt for choice!  At this time of year I’m time rich and cash poor, since it seems half of Slovenia de-camp to the coast for their holidays so there’s slim pickings when it comes to work. However, I’m fortunate that I enjoy activities such as hiking and cycling which require spending very little, other than having a good pair of walking shoes and bike.

My days tend to start early, no lazy lie-ins for me, in order to get a good few hours of hiking or cycling in before the midday sun. Then it’s time to seek refuge indoors, or at least somewhere in the shade, preferably with as huge an ice-cream as possible! But I really don’t mind the heat here. Despite my constant moaning and moaning (and moaning some more) about the long winters, there is one advantage to living in an alpine climate – in general the summers are without the humid, stifling heat that can be uncomfortable and even when it is scorching it’s never hard to find some shade or to head up into the mountains where the air is cleaner and cooler and with stunning views to boot.

When the temperatures really hot up, parts of Radovlijca can seem like a ghost town from late morning until early evening, when people begin to venture out again as the temperatures drop. There are always however a constant trickle of tourists visiting to see the compact, but magnificent, medieval old town centre with its frescoed buildings, St. Peter’s Church, the Šivec Gallery, the Radovlijca Mansion, the Lectar Restaurant and Live Gingerbread Museum and the amazing views across the valley and the Jelovica plateau and onwards towards Slovenia’s highest mountain, Triglav (2864m). 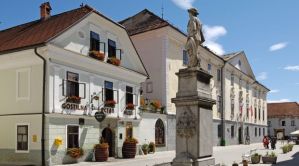 So, where have I been this week? Where haven’t I been! Hiking to Begunščica, by car to the Trenta valley and hiking to Kriški podi, by bike to Pokljuka, cycling and hiking to Kropa and Vodiška planina – to name but a few. That’s what is so great about living here, pretty much the whole country is within easy reach. Let me elaborate further about at least one of my walks (so as not to bore you with them all)…

From Radovljica, the most direct way to reach Trenta and the Soča Valley is over the Vršič Pass. At 1611m, Vršič is the highest road pass in Slovenia and usually closed for most of the winter. Once over the 50 hairpin bends, the road descends to reach the Trenta Valley which comprises the small settlements of Trenta, Lepena and Soča and is entirely within Triglav National Park. If you are seeking peace, solitude and an abundance of walks and natural features, then this is for you, but there really is little else; one small shop, a handful of tourist farms, camps and restaurants and that’s about it. There are only around 100 residents living permanent in the valley, though during the summer season this number is somewhat inflated by tourists and tourism providers. The centre of the valley is the Trenta Lodge Information Centre, which houses a Triglav National Park Information Centre, the Trenta Museum and tourist apartments for rent.

The Zadnica valley, reached from Trenta, is the start point for a number of walks up into the high mountains of the Julian Alps. It is from here that I walked up to Kriški podi and to the mountain hut Pogačnikov dom na Kriških podih and the 3 Kriški mountain lakes. The path is long, with a 1400m ascent taking over 3 hours, but it is surprisingly easy and the spectacular views means one can be easily distracted from its length. The route follows an old World War 1 mule track, which begins pleasantly in the shade of the forest before emerging into the typical craggy limestone world of the Julian Alps, and leading up to the Kriški podi plateau. The lower lake (Spodnje Kriško jezero) is the largest of the three, and worth making the short diversion to see. The middle lake (Srednje Kriško jezero) can be seen from the mountain hut, though it was still half covered in snow when I visited and this is not uncommon, snow can remain here pretty much all year round. The upper lake (Zgornje Kriško jezero), which I did not visit as there is no direct marked path to it from here, is a further 200m higher.

Next Sunday, the 4th of August, it’s the annual Medieval Day in Radovljica. I always look forward to this and make sure not to miss it as the old town centre comes to life with a whole host of activities, dances, street performances and a market – http://www.radolca.si/en/what-to-do/events-1/medieval-day-in-linhart-square/83/310/