Hiking is a very popular past time in Slovenia. One might even go so far as to call it a national passion and none more so than here, where I live, in the Gorenjska region, home to the Karavanke and the Julian Alps.

There are over 170 mountain huts in Slovenia and many people base their trips to the mountains around visiting one of the huts. The huts vary in their style, accommodation and the food and drink on offer. However, at the very least there is always a cup of warming local tea and some type of soup or stew available.

Whilst the food varies from hut to hut, typical food found in most of the Slovene mountain huts includes ‘jota‘ – a thick soup containing sauerkraut, and potato, ‘ričet‘ – a thick soup containing pearl barley and vegetables – usually these soups can be ordered with meat (sausage or other pork meat) or without (for vegetarians) and various types of sausage. For something sweet, the staple offerings include ‘jabolčni zavitek‘ – apple strudel and/or ‘palačinke‘ – pancakes. The food is pretty standard throughout the year, its isn’t seasonally adjusted, often due to the constraints of getting the food to the huts and the limited storage facilities within so even in the height of summer be prepared for steaming hot soup and comfort food!

Talking of food, you know you must be eating too much pizza when you actually end up having a pizza named after you, as I now have! Pizza Adele, as seen below, now features on the new menu at one of my favourite restaurants, Pizzeria Ema in Srednja vas pri Bohinju, where they have HUGE pizzas. I probably should add that I didn’t eat the whole thing – half lasted until the next day! Give it a try if your passing!

Woops, went slightly off topic there – back to mountain huts! Češka koča, located in the Kamnik–Savinja Alps, above Jezersko, has a very different appearance to the other mountain huts in Slovenia, due to it having been built by the Czech Branch of the mountain association, hence the name Češka koča, meaning Czech hut. It was officially opened in 1900 and has been renovated several times since then, but still retains its original appearance.

There are a number of options for reaching Češka koča. Together with 2 friends, we took one of the 3 paths which begin at Ravenska kočna (1080m) and climbs up to the hut at 1542m. The path is marked with the usual red and white circular markations and is easy to follow. The path begins rather steeply up through the forest and later, in places there are wooden ladders and a few exposed sections where this is steel cable to assist, but it is well secured and is not technically demanding. 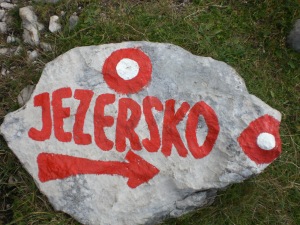 From the hut, there are also a number of other tours that can be made, such as to hut Kranjska koča na Ledinah or to the peaks of Grintovec, Kočna or Skuta. However, all the paths from here are rated as ranging from partly to highly demanding and should therefore only be undertaken by experienced and well-equipped hikers.

This coming week, Lambergh Chateau and Hotel in Dvorska vas, near Begunje are hosting 2 events. On Tuesday its the Pool Party featuring night swimming, music and cocktails whilst on Friday, they are holding a Chateau Dinner. The theme for the 5 course dinner, with matching wines, is honey and there will additionally be music, storytelling and a visit from the Radovljica Beekeeping Association. More information about the hotel and their events can be found here – http://www.hotel-lambergh.com/en/

9 thoughts on “Hiking and mountain huts in Slovenia”