The start to last week was HOT, to say the least! Temperatures were in the mid-thirties up until Thursday when, as forecast, a big storm swept through the valley, bringing the temperatures right down. At this time of year it’s not uncommon to have afternoon storms, some of them quite violent, so its usually generally best to get up and out early to be back in the safe and dry before they hit. Despite the climate here being alpine, the afternoon storms can sometimes make it feel like being in the tropics, but they don’t usually last long.

As I mentioned in last week’s blog, one of my favourite activities at this time of the year (apart from eating ice-cream!) is cycling. If I’m short of time, a ride that I like to do is the Lowland Cycle Route (35.6km) which begins in Radovljica and leads through the Lipnica Valley. One of Slovenia’s top cyclists, Marko Baloh has just released a video of him riding the entire route and described it as being most scenic and particularly good for winter training as it is flat(ish) – nothing is entirely flat in Gorenjska – and almost entirely on tarmac roads, except a kilometre or so which can be bypassed for those on road bikes. The video can be seen here – http://www.kinomap.com/watch/9jddwx

I have compiled quite a list of places to go and things to see/do, adding to it whenever I read about a new path or somewhere I haven’t yet been, and gradually ticking them off the list as I get round to them. One of such is the Grmečica waterfall which, as of Saturday, I can now tick off the list too! Slovenia has hundreds of waterfalls and Grmečica must be certainly one of the less known and is far from being one of the biggest/highest/widest or any other such superlatives. However, to me at least, therein lies its beauty.  Admittedly, the waterfall, which seemingly emerges from nowhere, isn’t in itself that impressive, there’s no gushing water, more of a trickle, certainly at this time of the year. However, its location amid hidden canyons, with crystal clear water and small pools, off the beaten track, and rarely frequented, makes it all the more interesting. 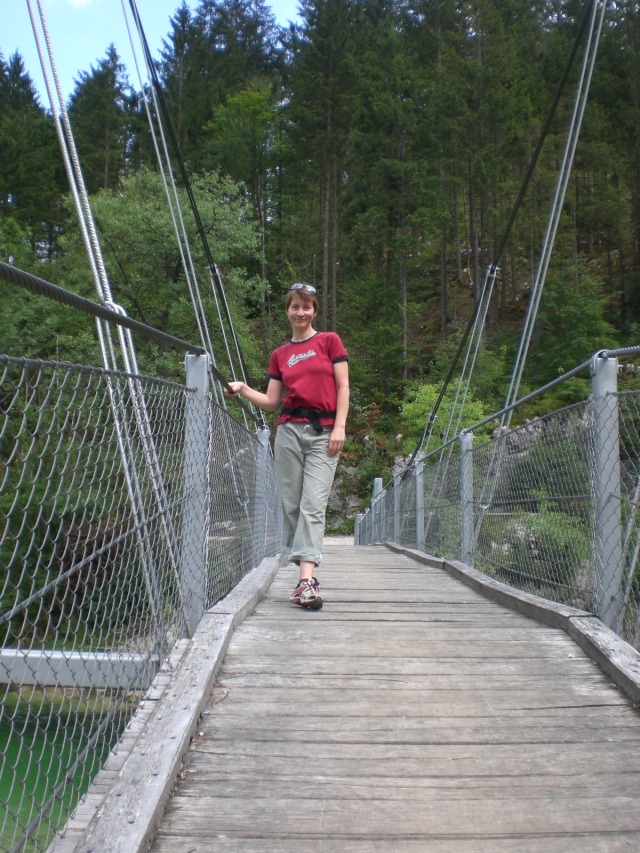 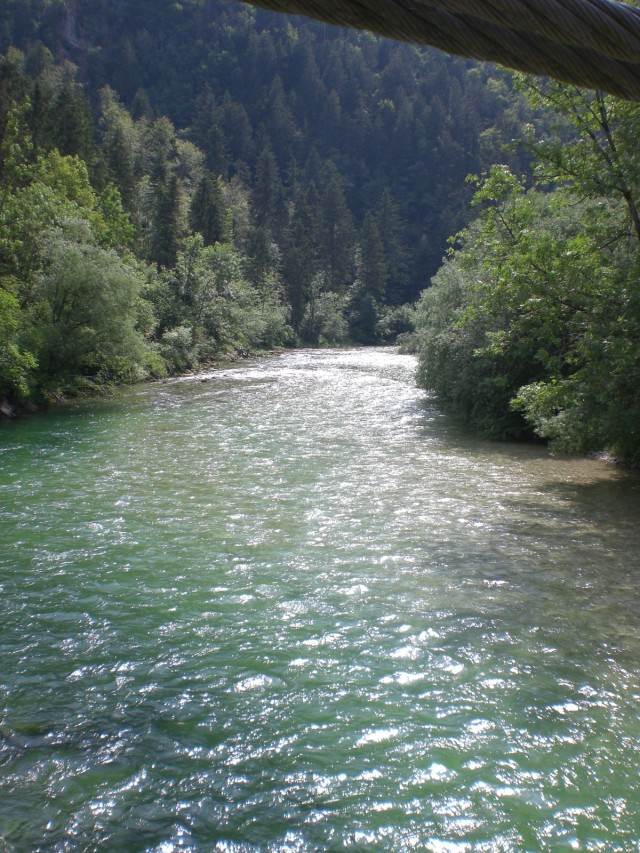 The waterfall, hidden under the northwest edge of the Jelovica plateau, was previously barely accessible as there was no way of crossing the Sava Bohinjka river. However, since a new suspension bridge across the river was built in 2010, it has now become a lot easier to reach. It is best reached on foot from the village of Nomenj, on the road from Bled to Bohinj. A path leads under the railway line, across the river and then alongside the river before reaching the waterfall. After seeing the waterfall you can double-back to take the unmarked, but clearly visible, path which leads steeply up through the forest above the waterfall for impressive views deep down into the canyon below. There are ropes installed in some places which indicate that the area may be, now or perhaps in the past, used for canyoning. However, clearly a lot of work will be necessary to clear the debris from this winter’s ice-storm. A word of caution though, do have good footwear and look where you are treading. A misfortunate stumble over a tree root has left me nursing a bruised and battered shin, which is now every colour on the spectrum of the rainbow. Having a freezer chock full of everything but ice, Saturday evening was spent with a variety of frozen bread and vegetables on my shin!!! 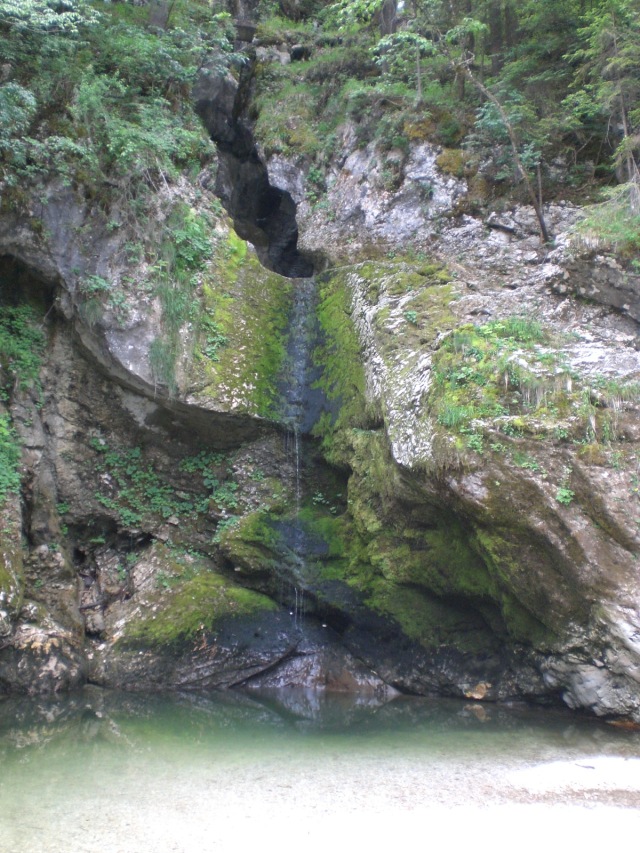 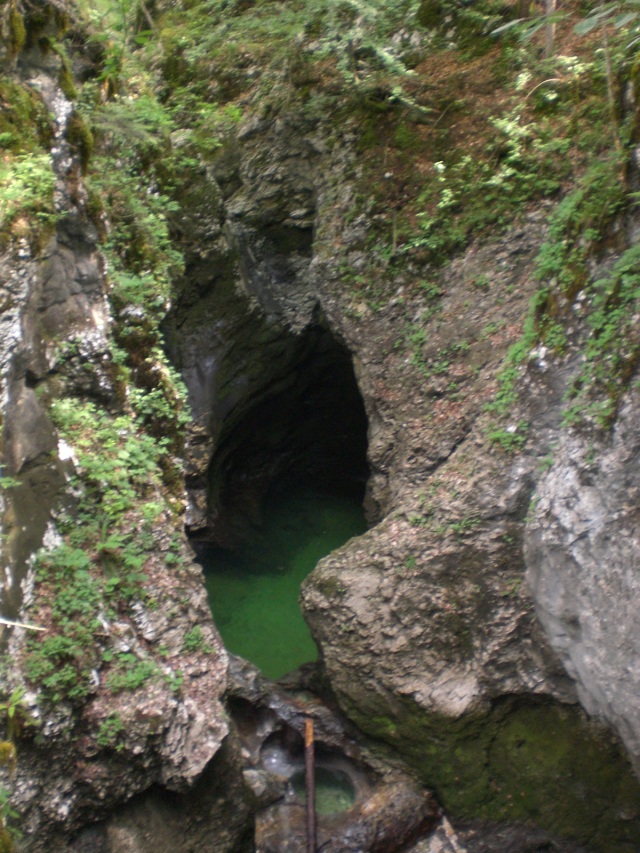 On the way back from seeing the waterfall, a short detour through the village of Bohinjska Bela proved fruitful as I happened upon a village festival taking place and was able to watch the parade, listen to the music and enjoy the merriment – as were it seems the entire village! 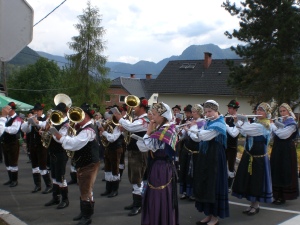 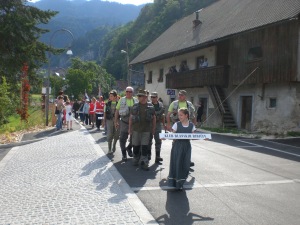 At this time of year there is a lot happening in and around the Bled/Radovljica area, to much for me to be able to list here, especially since one of the golden rules of blogging seems to be to ‘keep it concise’. Therefore, each week I will list just a few of the main highlights and some of my favourites events and attractions. However, for more details, and up-to-date information, take a look at my ‘Adele in Slovenia’ facebook page (‘Like’ it) and/or use the links on the right to the tourist office websites.

The inaugural Bled Film Festival will take place from 17th – 26th June. It will feature 8 films and 8 documentaries, which will then be judged for awards, all with a focus on raising awareness of environmental issues surrounding water. An accompanying programme of events, talks and parties will take place on the pristine shores of Lake Bled. More about the festival can be found here – http://www.bledff.com/

On Monday 23rd June, Midsummer’s Eve will be celebrated in the usual manner with a bonfire and medieval events at Kamen Castle in Begunje. The ruins of the gothic and renaissance castle, built in the 12th century by the Counts of Ortenburg, provide a magical setting for the celebration.

On Saturday 21st June its the annual Škofja Loka Festival of History. The event transforms the beautiful old town centre into a medieval wonderland for the day with locals dressed in traditional clothing, market stalls selling traditional crafts and wares, workshops and performances. More information can be found here – http://www.historial-skofjaloka.si/home.aspx