It was brief but great whilst it lasted, which could perhaps be said of many things in life! I am, however, referring to the brief return of ‘summer’ that we enjoyed last week. It began on Wednesday when, after a very cool start to the day, late morning all of a sudden the clouds lifted, the sun broke through and it felt warm, hot even. Oh how I rejoiced at seeing the blue sky, feeling the sun’s rays on my all-too pale skin and I felt my mood instantly lifted. There’s one thing for sure, when you haven’t had, or seen, something for a long time, you certainly appreciate it even more. Alas, it didn’t last and thus only served as a reminder of what we have, this ‘summer’ missed out on. As I sit writing this on Monday morning, it’s currently 10 degrees out there and I can see snow on the tops of the mountains brrr…..

Unsurprisingly then, I didn’t waste a minute and since it was a slack week workwise, I was able to cram in quite a few walks and bike rides. So here is the run down, which I hope will also offer some ideas for short walks and bike rides around the area.

On Wednesday afternoon I drove to Trzič on onwards to Ljubelj for a walk up the old Ljubelj pass. Prior to the building of the Karavanke tunnel from Slovenia to Austria in 1991, all transport from the Gorenjska region towards the Ferlach region of Austria used to travel over the Ljubelj pass which passed over the Karavanke range reaching a height of 1370m. One can only imagine how painstakingly slow the journey must have been, particularly in days of old when cars didn’t have as much grunt as they do nowadays.

The original road, which is now only suitable for walking as well as being a popular destination for sledging in the winter, closed to traffic in 1967, when an improved, wider road was built, which is today still in use, though less frequently so with many choosing to drive through the Karavanke tunnel instead. The Ljubelj tunnel was built on the order of Nazis by civilians and prisoners from the nearby Mauthasen concentration camp. Today, the remains of the concentration camp still stand just beneath the Ljubelj pass, where one can stop at the memorial to see the site and take a moment to ponder the horrific lives the prisoners there endured. 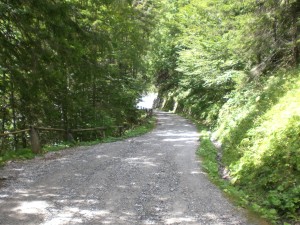 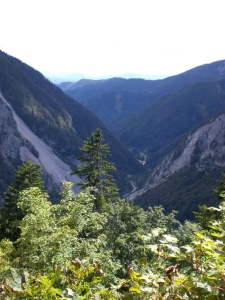 Today the mountain hut ‘Koča na Ljubelju’ is a popular destination in itself, and takes only around 45 minutes to reach from the parking area, as well as it being an onward point for hikes on both the Slovene and Austrian side of the Karavanke. The two obeslisks, as seen below, mark the border between the two countries and one is spoilt for choice with views across both Slovenia and Austria,. 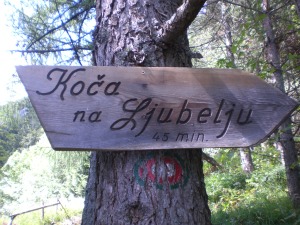 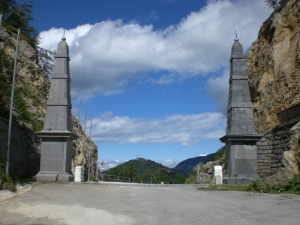 Thursday morning began with a ride to the Završnica reservoir followed by a walk up to the Valvasor mountain hut (Valvasorjev dom) which sits at 1181m, on the slopes of Mount Stol. Not content with just that, in the afternoon I drove to Kranjska Gora from where I walked across the pastures to the picturesque village of Podkoren, which is particularly popular with skiers in the winter, and from there onwards to the Zelenci springs. These emerald green pools are known for the springs which rise up from the bottom of the pools and for the water temperature which remains at 5-6 degrees year-round, regardless of the air temperature. The clarity of the water, the stunning surrounding alpine scenery is reflected in the pools and it is a wonderful place to enjoy a moment of calm. 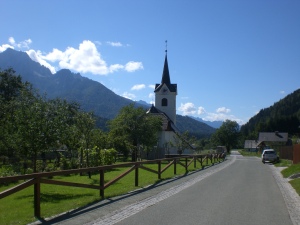 On Friday, together with some friends who are over from the UK, we cycled the 35km lowland cycle route from Radovljica through the Lipnica valley. More information about the route can be found here – http://www.radolca.si/en/lowland-cycling-trail/

On Saturday morning, after cycling to the Draga Valley, I hiked up to the Preval highland then took the route ‘čez Roža’ to reach the Roblek mountain hut, (Roblekov dom) at 1672m. Sadly, the path from Draga to Preval, particularly the lower half of it, is currently in a pretty bad state and barely resembles the pleasant path it once was due to the ravages of this year’s winter. The path from Preval to Roblek however was improved last year and remains as scenic as ever.

On Saturday afternoon the Večno mladi (Forever Young) parade took place through the streets of Radovljica.  This event, which has been taking place annually on the last weekend in August since 1975, begins with a hike for the club members to Stol, the highest peak in the Karavanke range. The remainder of the entertainment, comprising a parade through the streets of Radovljica complete with marching bands, Slovene folk music, old-timer bikes and cars, is open for all to enjoy and participate. The festivities then continue into the night with a concert and fireworks display on the Saturday evening. More pictures can be found of this, and other such events and places, on my Pinterest page.

Meanwhile, following this weekend’s mini-marathon in Bled, next weekend comes the Bled Triathlon. There are triathlon categories to suit everyone; from those wanting to just ‘give it a try (the Super Sprint triathlon), to those wanting to conquer an Olympic distance triathlon, as well as a relay event and an aquathlon. More information can be found here – http://www.bled.si/en/events/2014/09/06/1340-Triathlon-Bled

At 2236m, Stol, meaning ‘chair’ due to its shape, is the highest peak in the Karavanke range, is a landmark in the Gorenjska region. Luckily for me, I can see it from my bedroom window. It is quite common for its peak to be shrouded in cloud and often accompanied by a strong wind too. However, this Sunday there wasn’t a cloud in sight other than a few whispy ones that disappeared as quickly as they appeared. There was also no wind blowing, not even a breeze, and also neither searingly hot nor unpleasantly cold – in short, a perfect day for it. Many people choose to drive up and start their hike from the Valvasor mountain hut (1181m), cutting about an hour off the time needed for the ascent. I however prefer to begin from the valley floor in Završnica. Setting off from the car park next to the small reservoir, I followed the path, first to the Valvasor hut, then onwards and upwards via the (slightly steeper and shorter) Žirovniška path, descending via the (slightly longer and less steep) Zabreška path – this making it a circular route. As can be seen in the photos below, there’s still a little snow up there, in the gully between the top of Stol, to the left, and the Prešeren mountain hut (Prešernova koca), to the right. However, as the route up is on the sunny, southern facing, side it has almost all gone. The same cannot be said of the Julian Alps, where there is currently still a lot of snow remaining. As the Karavanke form a natural border between Slovenia and Austria, Stol can also be climbed from the Austrian side, though the ascent is more exposed, more rocky and, at this time of the year, more snowy than the southern facing Slovene side. Of course, with it being such a lovely day, I certainly didn’t have the place to myself. You can probably just about make out the ant-like looking line of people on the top in the photos below. 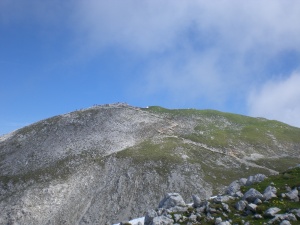 On Saturday afternoon, I popped to Bled to the opening of the summer season programme of the Sava Bled Hotels group, on the terrace at Hotel Park overlooking Lake Bled. The hotel is famous for its Bled cream cake ‘kremšnita’, which it has been producing for over 60 years. The cake comprises a thick layer each of cream and custard between two sheets of thin pastry. As well as the ever popular cake, this year some new flavours of the cake have been created, including chocolate and forest fruits. Not one to turn down such an opportunity, and seeing as they were on a special 2-for-1 offer, I, of course, indulged and, being the chocoholic that I am, can confirm they are both equally delicious with the chocolate one perhaps just edging it for me! You can read more about the Bled cream cake here – http://www.bled.si/en/what-to-see/symbols-of-bled/cream-cake

The Bled Sava Hotels also have a packed programme of musical events throughout the summer including traditional Slovene evenings, music and dance nights by the lake, acoustic music evenings, a cappella performances and more – and even better they are free to attend too (though of course some form of eating and/or drinking will be encouraged!).

Talking of hotels, last week, coincidentally on the same day, saw the official opening of 2 new exciting additions to Slovenia’s range of hotels.  In Ljubljana, the Four Points by Sheraton Ljubljana Mons opened. This was quite a major event as it is the first globally branded hotel to enter Ljubljana for over a decade. Meanwhile, in Bled the new eco-tourist green resort – Garden Village Bled – also opened. I have yet to go and take a peek (its on my ‘to-do’ list) but it looks pretty exciting and unique and I will write more about it once I’ve had a chance to get there in person.

With the holidays here there are now even more events happening around the Radovljica/Bled areas, just some of which I have picked out and listed below: