It’s been quite a year thus far for the Park of Military History in Pivka. Visitor numbers are up by an astonishing 40%, as word spreads about this fascinating museum and its extensive and diverse collections. Last week the park celebrated its 10th birthday – in true military style of course – with a week of events culminating in the annual Festival of Military History, which I attended on Sunday.

It’s easy to reach Pivka, which is in Slovenia’s Green Karst region. It can be a destination in itself, or you can combine it with a visit to one of the other nearby attractions in the area, such as the Postojna Caves, Predjama Castle or the Lipica Stud Farm. The park is also an ideal place to visit on those pesky rainy days!

For those without transport, a bonus is that it is easy to reach Pivka by train. Direct trains run from Slovenia’s capital, Ljubljana and onwards toward Rijeka in Croatia. On arrival you can already see the imposing renovated barracks in which the museum is housed. When exiting the train station, just look for the museum symbols marked on the pavement. 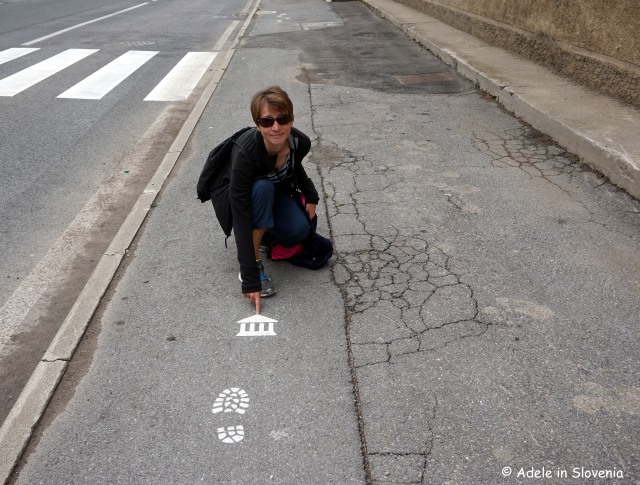 After crossing the tracks, head downhill, following the green signs, and within 10 minutes you are there! 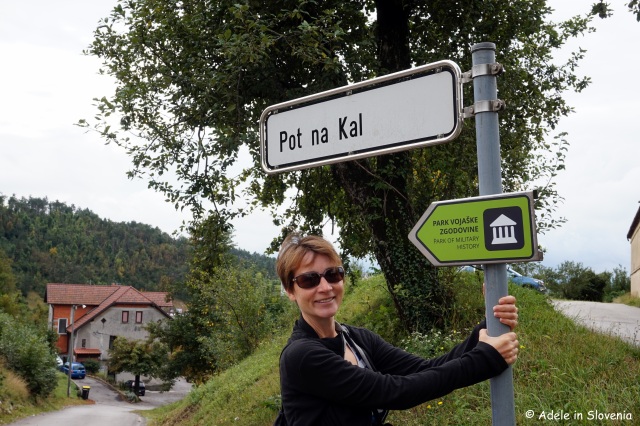 One of the biggest draws at the Park is undoubtedly the P-913 Zeta submarine, which visitors have a chance to go inside, accompanied by a guide, to experience the cramped conditions the submarine crew worked under. 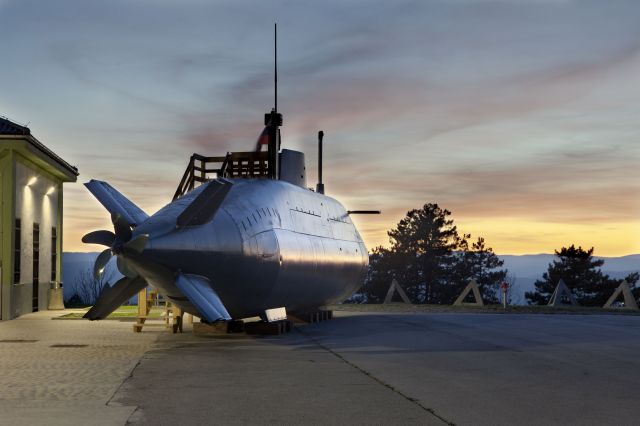 The renovated barracks housing the museum collections were built by the Kingdom of Italy around 1930 in order to defend the Rapallo border and were later home to the Yugoslav People’s Army. Since 2004 the Park has been developing and has now become the largest museum complex in Slovenia, as well as one of the largest military historical complexes in this part of Europe. 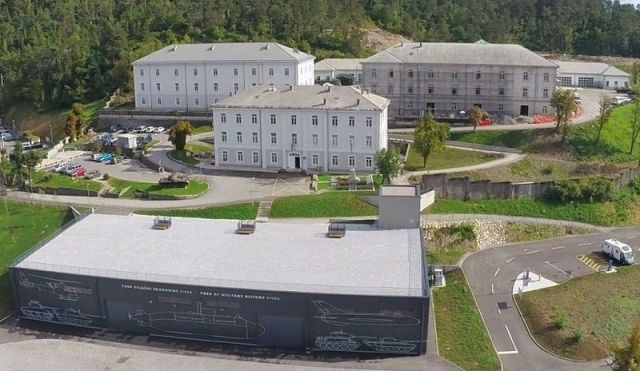 Of the numerous military-related events that take place at the Park throughout the year, last weekend’s 10th Festival of Military History, which was meticulously organised, is the largest. Below you can see some of the action that took place. 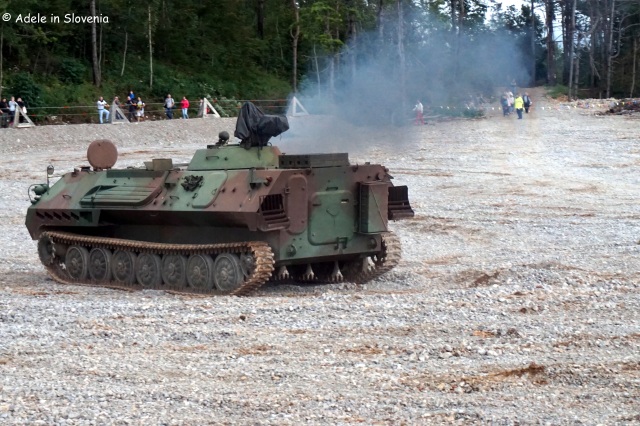 A dynamic display of anti-terrorist measures with the helicopters of the Special Forces and the Slovene Army. 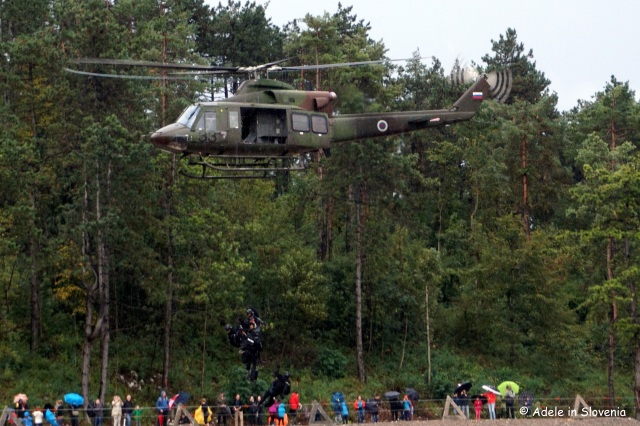 Recreations of various World War II military camps – Partisan, Soviet, American, and German. At times I felt like I had walked onto the set of MASH! 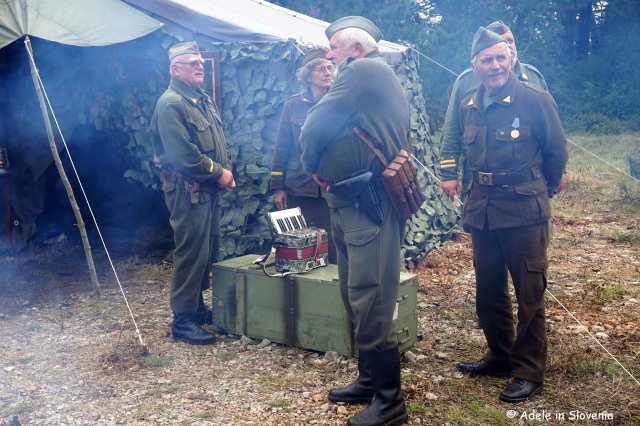 There was even fresh Jerry soup! 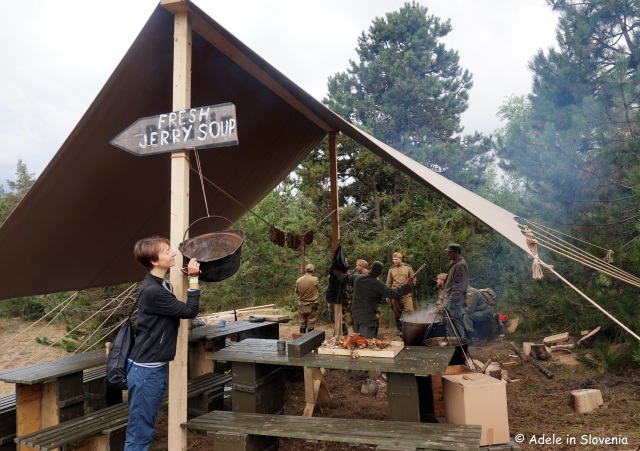 A chance to walk through a cavern. Provided, of course, you could get past the guards! 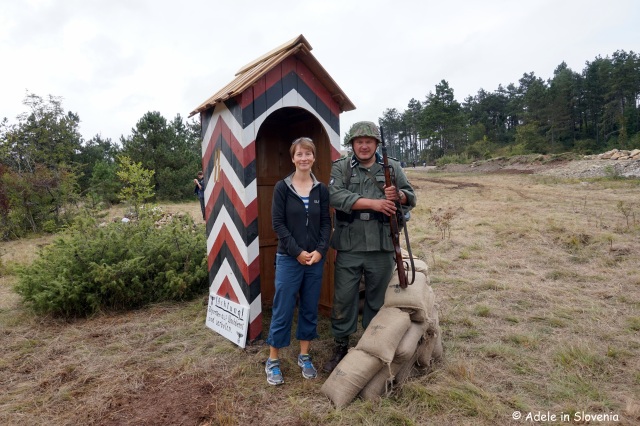 There was plenty of opportunity to get involved, ask questions, and, of course, pose for a few snaps for posterity! 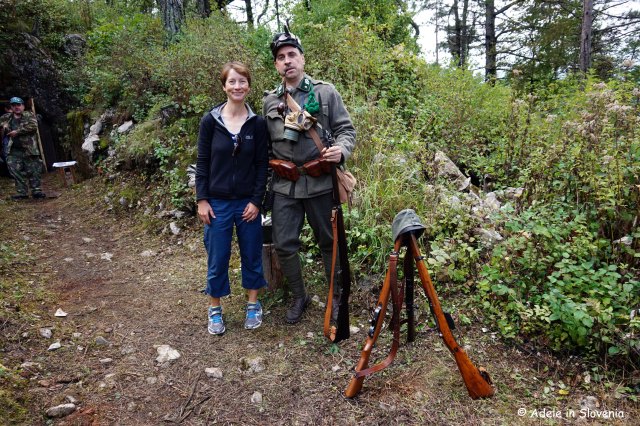 A chance to get ‘hands on’ with the ammunition. The first, and hopefully only, time I will be holding such a weapon!

Not even the occasional torrential downpour dampened the spirits of these strapping Romans (from Ptuj)! Can you spot the odd one out? 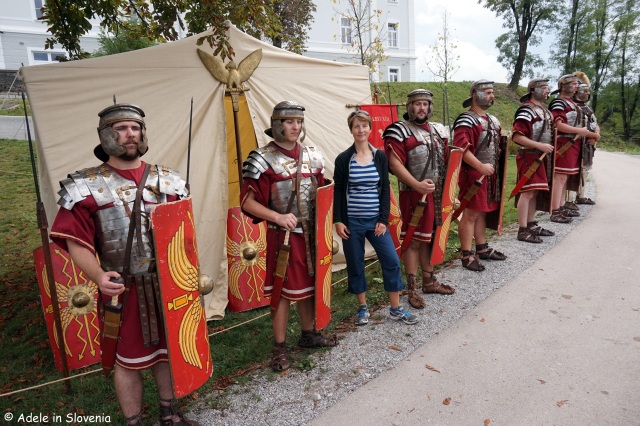 There was also archery, a small market area, a collection of old-timer cars, and free transport to/from the railway station. The festival was a roaring success and another testament to the Park’s popularity.

You can find out more about the Park here – http://parkvojaskezgodovine.si/en/ and also read more about other things to see and do in the area, including the 17 intermittent lakes, in a previous blog from earlier this year – https://adeleinslovenia.com/2016/05/05/pivka-pause-ponder-play/

You don’t need to especially be a lover of museums, history, or military history (I wouldn’t consider myself to be!) to enjoy a visit. The exhibits are fascinating and there’s something for all the family. I highly recommend a visit!

Whilst I generally tend not to write about those places in Slovenia that are already huge tourist attractions, preferring instead to write about some of the lesser-known parts of this wonderful country that I now call home, the current phenomena that is occurring in the Postojna Cave is hitting the headlines all over the world and really is a major news story, so I decided it was time to find out more and see it up close for myself.

So, what’s all the fuss about? Well, it’s this weird and wonderful creature – the proteus – also known as the olm or humanfish – which has laid eggs and the world has been waiting to see if these amazing ‘dragon baby’ embryos will hatch. 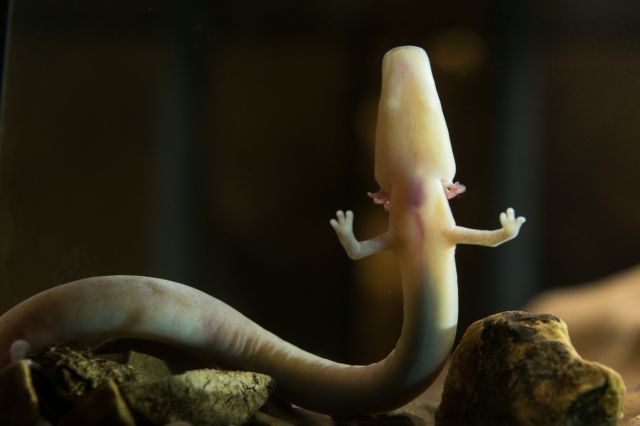 Today, Wednesday 1st June 2016, is a momentous day as the first one hatched and made its debut appearance! 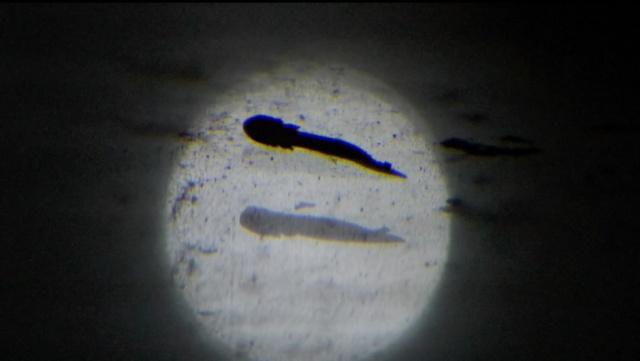 The news about this significant, once in a decade, event first broke at the end of January 2016 when a cave guide noticed the first egg attached to the wall of the aquarium. The female then laid over 50 more eggs until she stopped laying on 10th March. 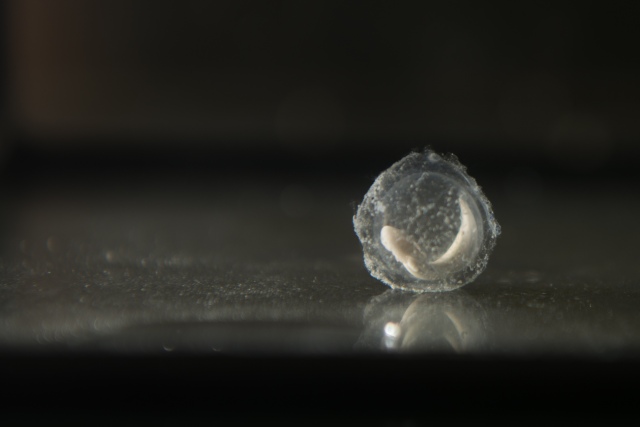 And then the long wait began for the team of biologists at the Postojna Cave, who have been carefully monitoring movements and, like expectant parents, have been eagerly awaiting the happy day! As any expectant parents will know, it can sometimes seem like a long frustrating wait but, hopefully, the end results are worth the wait! Though one has now hatched, it’s still a waiting game for the remainder. 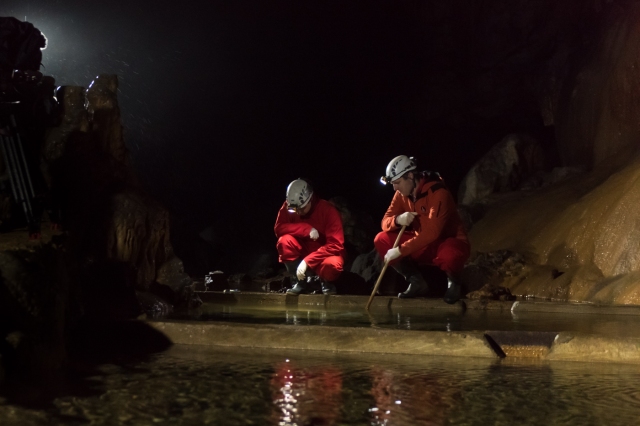 When talking with the cave’s management team and biologists, and hearing their tales of tears of joy, I could actually sense the expectancy, excitement, and pride in the job. Yes, the Postojna Cave is a huge tourist attraction but it is also a significant place for research and development of cave habitat and it is clear this is something not taken forgranted.

Cave biologists inspect the eggs daily and remove any that are decaying, which is not an easy task. A biologist has to dive into the large aquarium and inspect the eggs in a difficult-to-reach spot that is half a metre below the surface.

These tiny embryos are fighting against the odds to survive, as only a small percentage have a good chance of developing into adults and there is also the risk of genetic mutations. 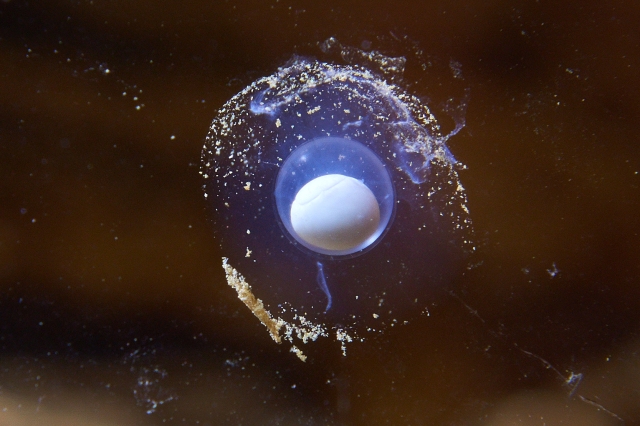 The more the eggs develop, the higher the pressure for them to survive. Whilst the Postojna Cave has an excellent programme in place for looking after the proteus, this mysterious animal is still at the mercy of nature and its unpredictability. Preparations for the potential newborns will be very demanding and therefore Postojna Cave’s biologists paid a visit to a French lab, returning with numerous pieces of valuable advice.

Visitors can’t actually see the eggs up-close, since light, noise, and any other elements which could result in harm to the eggs, is avoided at all costs. Therefore, a screen has been provided for visitors where they can watch live footage of the eggs moving and developing. 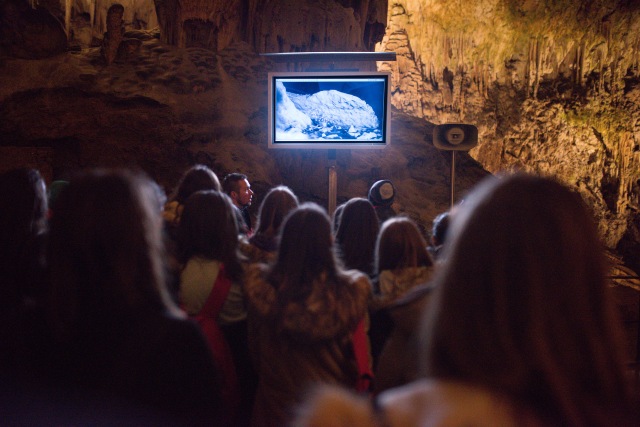 Take a look at this short mesmerising video showing the movement and progress of the embryos.

As I had already visited the Postojna Cave on 2 previous occasions, this time, instead of taking the tourist train into the caves, I first visited the Vivarium Proteus where you can see and learn about all the weird and wonderful creatures that live in the cave system, then toured the new EXPO Karst exhibition, which is full of interesting and interactive exhibits about the cave’s history and formation. Apparently, if I grew like a stalagmite, I would be 18,000 years old! 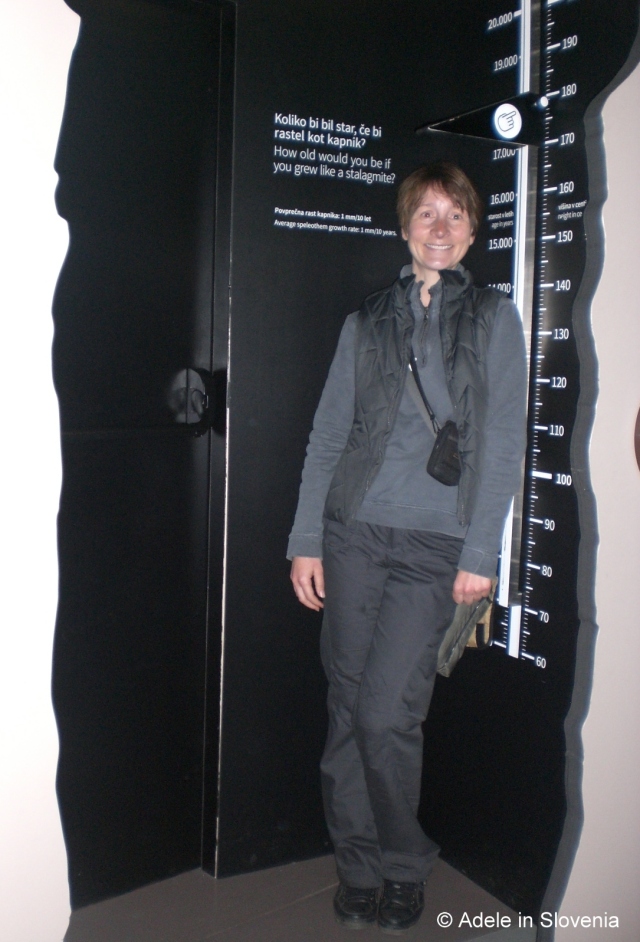 You can learn about the fascinating Karst world and meet some of its inhabitants! 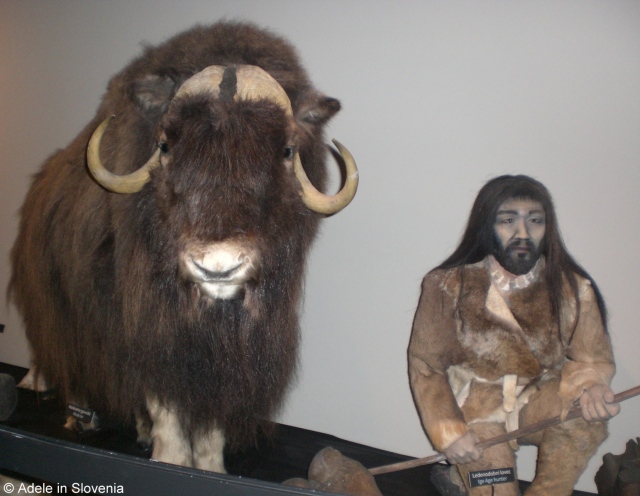 For those who haven’t yet visited the Postojna Cave, I highly recommend it, it’s like nothing you’ve ever experienced before, and everyone, regardless of whether young or old, loves a ride on the mini-train! 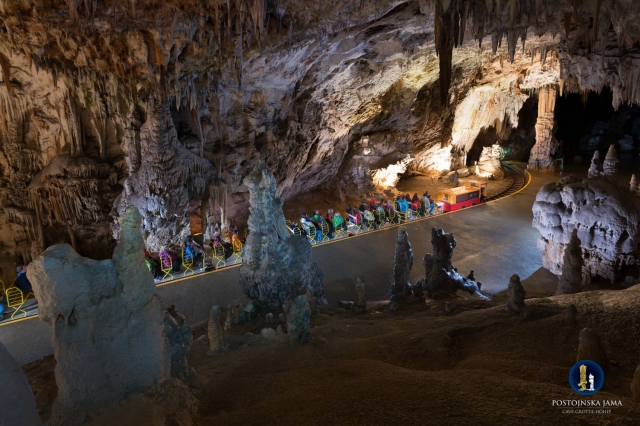