Some while ago I visited, or attempted to, the Path of Peace (Pot Miru) in Brezje. However, although I walked on parts of the path, I didn’t actually find the entire path from start to finish so this weekend that was rectified. Actually, since I seem to know most of the paths and hiking routes better than a lot of the locals, the thinking behind the trip, thanks to a friend, was to take me somewhere where I hadn’t yet been; that for a change someone local would be guiding ‘the foreigner’ instead of vice-versa! Well, they partly succeeded as I had been there before but had failed to find the path in its entirely, so thanks! It was a lovely walk complete with warm temperatures and the autumn fallen leaves crunching underfoot.

The village of Brezje is known for its Basilica of Mary Help of Christians, one of the most known churches in Slovenia, a national sanctuary and pilgrimage centre. It is one of the 18 churches in the villages and town that comprise the area of Radol’ca (among them Radovljica, Lesce, Kropa, Begunje, Kamna Gorica, Brezje).

The path passes the Peračica waterfall. At just 4 metres in height, it isn’t the most spectacular of falls but still makes a pleasant place to stop, rest and comtemplate, among an oasis of calm in the forest in the midst of the Path of Peace. More about the path and how to find it can be found here – http://www.radolca.si/en/brezje-peace-trail/ 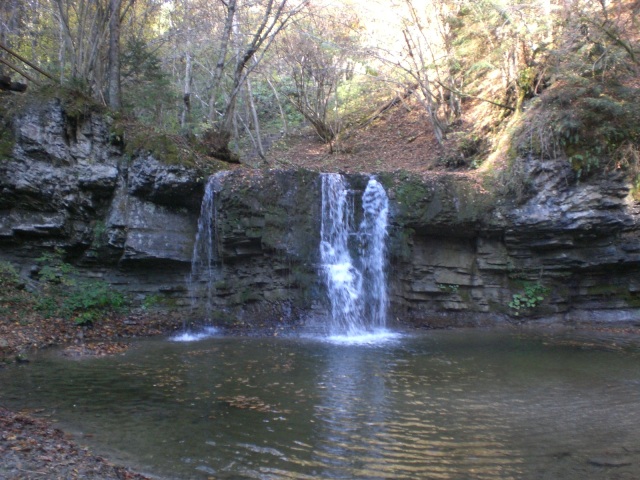 Christmas time arrived early in Radovljica this week, and what an amazing sight it was, as can be seen in the pictures below. I must admit to thinking to myself ‘Are you kidding – it’s only October’ when I saw the HUGE Christmas tree being assembled. However, when this was shortly followed by artificial snow, fir tree clad houses, hundreds of fairly lights and more, I realised something must be afoot. The reason was that a commercial was being filmed for a world renowned Italian sweet pastry.  It certainly captured everyone’s interest though, locals and tourists alike were enchanted by the scene. However, 2 days later it had disappeared as quickly as it had appeared, leaving us to wait and look forward to the ‘real’ Christmas and the host of ‘Merry December‘ events, including the Christmas Market, that will be taking place in Radovljica throughout the Christmas period. 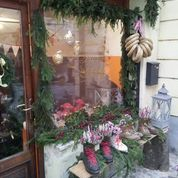 In a previous blog, I wrote about the success of the Radol’ca song, which had made it through to the finals of a competition of TV1 Slovenia to find the best song in Slovenia. Unfortunately the song, sung by Simona Vodopivec Franko, didn’t win, but has nonetheless become popular among locals. During a discussion with the song’s writer, it was suggested I could translate the song into English so that an English version could be recorded and added to the Radol’ca website so tourists can also enjoy listening to ‘our’ song. So, I did it, Simona recorded it, and I will put a link to it here soon. In the meantime here is the Slovene version again, this time with a new video to accompany it – http://www.youtube.com/watch?v=dSVg9FMNh2s

One thought on “Christmas comes early to Radovljica!”