Judging by the amount of snow I can see from my window, it seems winter has well and truly arrived. The snow, fortunately, is not (yet) at ground level but there has certainly been a lot of precipitation in the past week; rain here, snow above 800-1000 metres.

I haven’t been able to do much in the way of hiking because of the poor weather but I did at least manage one trip this week, to Dobrča, at 1478m. I took the route up from the hamlet of Slatna, which is located on the road which runs along the foot of Dobrča, from Begunje to Trzič, a mere 10 minute drive from Radovljica. The path goes up steeply through the forest, taking approximately 1.5 hours, to reach the mountain hut, Koca na Dobrči. The actual top of Dobrča, 1634m, is a further 30 minute walk and a further 10 minutes from the top is the Šentanski vrh viewpoint, which is certainly worth making the effort to reach. On this occasion I didn’t continue to the top as there was already snow beyond the hut, as can be seen in the pictures below. 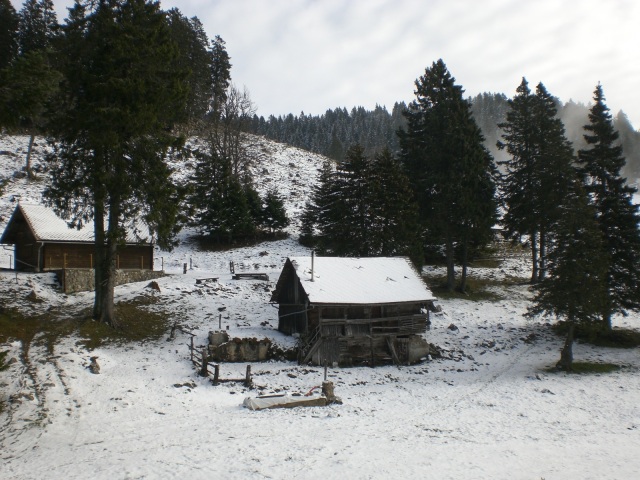 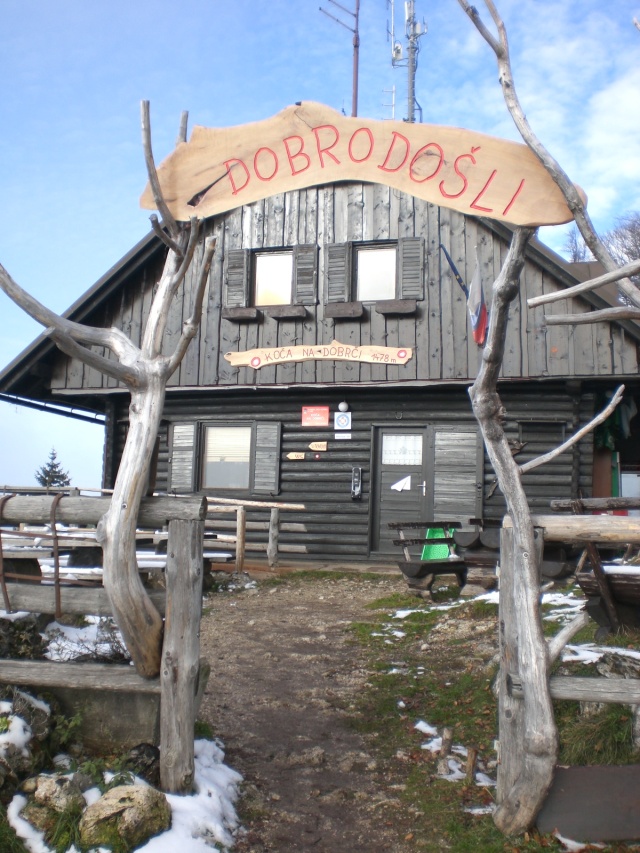 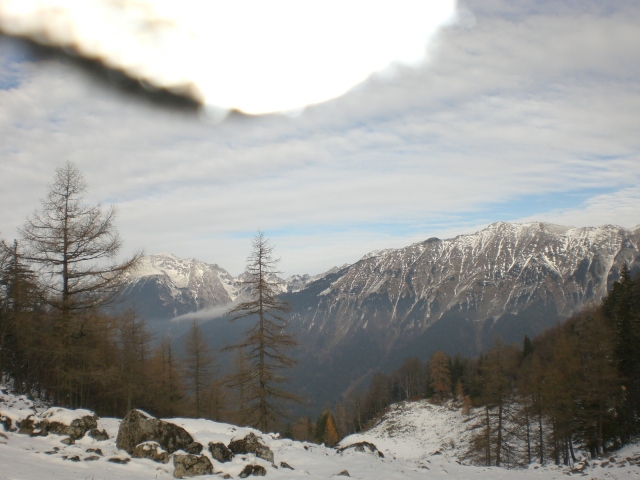 On the whole I love living in Radovljica. I love its location, the close proximity to the Karavanke and Julian Alps, Bled, Bohinj and direct access to the motorway making it easy to reach pretty much anywhere in Slovenia. I also love the wide choice of hiking and cycling routes, the good infrastructure, the medieval old town, the olympic size swimming pool and that fact that the town offers most of my needs right on my doorstop. There is, or rather ‘was’, however something that had been bothering me, something detracting from the beauty of Radovljica and its surroundings, and something, as I saw it, as a needless eyesore. I’m referring to the numerous advertising banners that were hanging from the street lights advertising the likes of Lidl 200m, Hofer 400m, Mercator 1km etc. In fact on the road from the start of Lesce to the end of Radovljica, and on some side streets too, there was almost 40 of them, bombarding us with pointless and unecessary advertising. I saw them as pointless because in the UK, where I’m from, there are millions of people and thousands of shops yet nowhere are there signs like here advertising each shop, yet people still manage to find the shops. Members of my family and several friends who had visited Radovljica, had also commented on what an eyesore they were and they really had a negative effect on the environment. Of course they provide a source of revenue for the municipality therefore in my letter to the Mayor of Radovljica, I suggested that, if advertising is really necessary, perhaps a better, less obvious, method could be sought. Imagine my delight then when last week the Mayor personally told me that since the contract had expired, he had now ordered the removal of all the banners forthright. Wow, what a result and what a huge improvement. I would once again like to say ‘Thank You’ to our Mayor. It is so good to know he listens and takes on board comments from residents and we now have an even more beautiful, cleaner, greener town. Perhaps this might inspire other areas in Slovenia to follow suit, leading to an even cleaner, greener Slovenia too.

The Christmas lights have now gone up in the old town centre and the festive season is now slowly starting to begin. The first event will be the St. Nicholas Fair (Miklavž sejem) which will take place in the atrium of St. Paul’s rectory, on Saturday 30th November at 4.30-6.30pm and again on Sunday 1st December at 8.30-11.30am. The celebration of St. Nicholas (Miklavž) on the 6th December, marks the name day of this most known of saints and is especially celebrated by children all around Slovenia who eagerly wait to see if St. Nicholas has bought them gifts to reward them for being good.

On Tuesday this week, the 26th, there will be a ceremony to officially open the new sculpture dedicated to the music of Avsenik. This traditional folk music was started by the Avsenik brothers in the village of Begunje na Gorenjskem in 1953. Their music is hugely popular worldwide, but particularly in neighbouring Austria, Italy and Croatia, as well as elsewhere in Europe, and people come from all over the world to listen to the three current house ensembles, visit the Avsenik museum and enjoy food and entertainment at the family run Avsenik restaurant. The ceremony will take place in the parking area near the Lidl store at 12 noon and is free to attend.

Also this week, on Thursday 28th, there will be a concert by the only Citar orchestra in Slovenia, from Brežice. The concert will take place in the Radovljica Mansion House, beginning at 7pm and tickets can be purchased at the Radovljica Tourist Information Centre.