As I have sat here today gazing out of the window, it’s felt almost like mid-May out there, which is quite unbelievable considering its March, albeit the last day. Sometimes at this time of year, as was the case last year, there can still be a significant amount of snow, even at ground level. However, with the current high temperatures this year’s heavy snowfall made a rapid disappearance, at least here in the valley. Appearances can be deceptive though as there are still several metres of snow in the high mountains where, despite the high temperatures, winter conditions still reign.

The fine weather encouraged me to make my first ever foray into the world of gardening. As someone who doesn’t know one end of a spade from the other, and is unlikely to be able to identify a weed from a prize-bloom, this is something of a revolution for me! However, Slovenes love, and are proud of, their gardens, allotments and vegetable patches so I decided its about time I also embraced this part of Slovene life too. I’m not expecting to turn green-fingered overnight but will certainly give it a stab and see what, if anything, grows!

Having had enough of snowy walks for this year, this weekend I chose cycling as my sport of choice. Radovljica offers a wide choice of cycling routes of varying levels of difficulty; from easier flat routes through the surrounding villages, to routes across lowlands and highlands, through the valleys and into the surrounding hills and mountains. Being so early in the season, I’m not yet quite bike fit enough for a big hill climb so I opted for the Lowland Cycling Route which leads from Radovljica through the peaceful Lipnica Valley, which is ideal for cycling as there is little traffic. More information about this, and other cycling routes in the area, can be found here – http://www.radolca.si/en/lowland-cycling-trail/

Also this week, whilst running along side the Sava river from the village of Lancovo towards Ribno, I noticed several fishermen as the fishing season is now underway and the Sava River at Radovljica is a fisherman’s paradise, or so I’m told! The fishing season begins annually on the 1st March and ends of the 31st October. I therefore decided to do a bit of delving to find out a bit more about fishing in Slovenia, and in particular on the Sava river.

The Sava river is formed of the Sava Dolinka and the Sava Bohinjka which meet at the confluence in the village of Lancovo, just beneath Radovljica. The Radovljica Fishing Club manages the first 23 kilometres of the Sava river ending at the brook before the mouth of Tržiška Bistrica river. At the beginning, there is a 2 kilometre “catch and release” district, where fly fishing with one artificial fly without barb and additional weight is allowed.

Did you know that Slovenia is actually one of the richest countries in Europe in terms of water, with over 27,000kms of watercourses? The emerald green Soča river is one of the best known and a real gem but the Sava river offers just as many opportunities with its deep pools, rapids, tranquility and not to mention the wonderful surrounding views; enough to satisfy many a fisherman’s needs. I can’t profess to be a fisher(wo)man myself, nor have I ever lusted after being so, but should I wish to do so I can think of no finer place to start than right here (almost) on my doorstep! More information about fishing in, and near, Radovljica and fishing permits, can be found here -http://www.ribiskekarte.si/en

Trout, as well as huchen are the most popular catches and you will find fresh river trout on the menus of many a restaurant throughout the country. It often comes just simply grilled, with or without lashings of fresh garlic, or served with almonds. 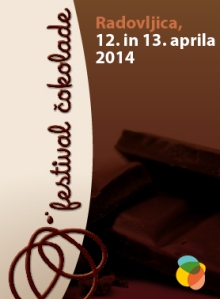 Oh by the way, just in case you haven’t heard, not that I haven’t mentioned it, its just 13 days to go until the Radovljica Chocolate Festival!!!!!!!!!!!!!!! For details of the programme and special accommodation offers, see here – http://www.radolca.si/en/what-to-do/events-1/3rd-festival-of-chocolate/83/309/