For the 7th time in the 23 years that Slovenia has been an independent country, the nation took to the polls again this Sunday to casts their votes in the snap general election, called following the resignation of Alenka Bratušek, the previous leader of the coalition government, on losing the battle for leadership of the ‘Positive Slovenia’ party after only 14 months in office. Although I now have permanent residency in Slovenia, I do not have citizenship and am therefore not entitled to vote. To be honest, even if I did have the right I wouldn’t know where to start with such a vast number of parties in the running and I will thus refrain (at least here) from proffering my views on Slovenia’s fragmented political affairs, especially since most, if not all, visitors to the country are of course blissfully oblivious to all the goings on behind the scenes and are free to enjoy the beauty of the country without having to endure its politics – a state in which I too would like to remain.

The weather during the past week has been far from summery, especially on Thursday when the daytime high here in the valley was only around 12 degrees and more than a few centimetres of fresh snow fell in the Julian Alps (you can see the photos I posted on my Facebook page). We are being promised ‘normal’ summer temperatures up to around 30 degrees from midweek onwards, so here’s hoping, it’s about time. This has meant I’ve had to somewhat, temporarily at least, curtail my plans for summer exploration and this week have been unable to tick-off any of the places on my personal ‘To See and To Do’ list!

On Saturday, I was headed towards the Pokljuka plateau for a walk but the threatening black clouds and distant rumble of thunder meant that I instead stopped at Bled and went for a walk around the lake; a regular fall back option if the weather is poor. In the event, carrying my (unopened) umbrella did the trick and ensured the sun came out and shined brilliantly for the entire circuit of the lake though within minutes of returning to the car the heavens opened. As is usual in the summer season, Bled was bustling with tourists; many walking around the lake, others relaxing by it, some taking a boat ride over it in one of Bled’s famous pletna boats, and others taking the tourist train around it. However you choose to see it, and/or travel around it, Lake Bled never fails to delight and it was particularly abuzz on Saturday as preparations were in full swing for the towns’ biggest running event – the 10k Night Run, which always attracts a large turnout of both participants and spectators.

On my return home I diverted to the village of Kamna Gorica, in the Lipnica Valley, for a look at the newly opened Sextons’ Museum House. The house, dating from 1803, stands perched on a small hill above the village, next to St. Trinity’s church, and affords wonderful views across the village and to the mountains of the Karavanke range. Kamna Gorica, together with nearby Kropa, was formerly one of the main iron working villages in the area of what is the present day Slovenia, and despite its modest size, the village has lots of points of interest, among them the water canals that run through the village which previously served the needs of the forges and led to the village also being known as ‘Little Venice’.

The house, which had been derelict for many years, has now been lovingly restored and laid out as a museum. It contains an original black kitchen and preserved living areas and offers an insight into life in Kamna Gorica then and now, and of the lives of those who used to live and work in the house and church. Note: entrance to the museum is free although voluntary contributions towards its upkeep are appreciated. More information about the house and opening times can be found here – http://www.radolca.si/en/the-sextons-museum-house/ 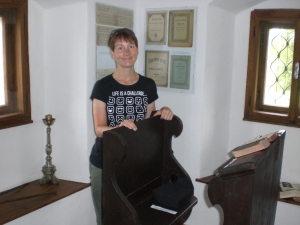 Kamna Gorica can also be visited on the Hop-On Hop-Off Tourist Bus, which is now operating throughout the summer until 31st August. Kamna Gorica is one of the stopping points on Tuesdays when the buses run on the route Bled-Radovljica-Kropa. The bus represents great value as the price of a full day ticket is just 5 euros and children under 10 travel for free and you can pick and choose where to get on and off and what to see and do. There are numerous places and sights of interest that can be visited as well as special offers for those travelling by bus. The Hop-On Hop-Off bus also runs on Thursdays on the route Bled-Radovljica-Begunje-Brezje, and on Saturdays and Sundays on the route Bled-Bohinj-Pokljuka-Triglav National Park. More information can be found here – http://www.radolca.si/en/hop-on-hop-off-radolca/

Next week its time again for Bled Days and Nights, one of the biggest annual events held in Bled, which attracts a large crowd of visitors from both home and abroad. The event takes places over three days, beginning on Friday 18th July and some of the highlights include:

Also coming up in the week ahead: