On Tuesday last week I went to the opening of the Triglav Roža Information Centre, which reopened its doors after a lengthy closure for refurbishment. The centre is located on the main road into Bled (Ljubljanska cesta 27) and is an excellent point-of-call for visitors to the Gorenjska region, especially those planning to spend some time in Triglav National Park, Slovenia’s only national park. The centre contains some interesting permanent exhibitions including about Slovenia’s highest mountain, Triglav and the National Park, as well as information about other parts of the Gorenjska region. Visitors can also watch a video and obtain maps and information. The centre is open daily from 8am – 6pm during the summer and from 8am – 4pm in the winter.

Whilst in Bled, I also took the opportunity to go and have a look at the new Garden Village Resort, which opened last month and wow is it AMAZING! Those that know me, will attest to the fact that I’m not exactly known for my ability to relax (always hiking/biking/running…..) but even I felt relaxed there among the green and serene surroundings, sitting by the pool area, sipping a cool elderflower cordial……. Happy Days – even if only briefly whilst I watched how the other half live!

The resort, located just 5 minutes from Lake Bled, is certainly ‘glamping’ at its best. It comprises a mixture of luxury tented accommodation, tree houses and apartments. The whole ethos of the resort is built around being ‘green’ – both visually and operationally – and it shows. The attention to detail is remarkable in every area including the restaurant, wellness and the gardens, where guests are able to literally pick and eat whatever is growing around the resort. Their website says ‘Adventurous, Romantic and Exclusive’ and I’d have to agree. Now, if only I could find someone adventurous and romantic to share it with!!! For those of you lucky to have found adventure and romance, here’s the link (it’s already pretty much booked up for this summer season) – http://www.gardenvillagebled.com/ 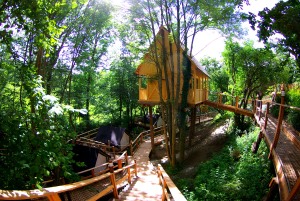 With the weather being so glorious for the weekend, I had a tough decision to make as to where to go and what to do – so much choice – so in the end I did a bit of everything! Saturday began with an early morning start, cycling from home to the lake at Bohinj. I then took the gondola up to the Vogel Ski Resort, which was celebrating its 50th anniversary of operation and thus had 50% discount on the usual ride charge. There was a great party atmosphere up there with plenty of entertainment including national folk music, presentations of national costumes and old-timer bikes, guided walks, workshops for children and market stalls. As a non-skier, I have only previously visited Vogel once during the autumn when it was shrouded in mist and there were no views to be seen and I was unable to explore the area fully. This time, it couldn’t have been more different. It was a glorious day and I was able to grasp just how extensive the area is and how much there is to see and do up there, regardless of the season. Being a ski resort, I’d always considered it more of a winter venue, but how wrong was I, and it has now been added to my list of summer destinations too – next time I might even consider hiking up there too! There are a wide choices of walks, either shorter, easier ones such as the Vogel Trail, or longer ones to one of the many peaks or highlands of the Julian Alps, such as Rodica or Planina Sija. The Orlove Glave chairlift also operates during the summer and can be used to shorten some of the hikes. There is also a bike park, several places to eat and drink and of course, it goes without saying, stunning and far-reaching views in all directions.

It’s going to be another busy week ahead with lots going on in the Radovljica/Bled area. Here is just a pick of the events: