Suffice to say, the weather last week still wasn’t conducive to much in the way of hiking and biking (though the start of this week has so far been much improved), so, in such times, I turn instead to food – my other great love!

I enjoyed a great meal with friends at Joštov hram in Podnart. Blink and one could easily miss this small and, from the exterior, unprepossessing restaurant, which is tucked away in the Lipnica valley beside the Sava river. However, it really is worth making the trip there, both for the delicious food and for the warm welcome and hospitality received. My advice would be to leave it to chef and proprietor Miso, ably assisted in the kitchen by his mother, so a real family affair, to work his magic and rustle up a selection of the delicious Balkan food on offer. I’m sure, like us, you won’t leave disappointed and certainly not hungry!

Joštov hram is just one of the restaurants that participate in the Taste Radol’ca collaboration which I have written about extensively in previous blogs and more information can also be found under the ‘Taste Radol’ca’ header at the top of my blog.

Taste Bled was also launched this summer. The collaboration is still in its infancy but so far, the following restaurants have signed up to participate and it is hoped that more will come on board in due course:

From this week, a new cycle map covering Radovljica, Bled and the surrounding areas will be available. The project came about thanks to a local, Blaž Bole, who saw a similar scheme in operation in the Netherlands and he, together with a team of volunteers, set about planning and installing a network of cycle signposts around the area. Having done the English translations for the map I have been lucky enough to be a part of its development and we are all justifiably delighted with the finished result. The number of signposts, each with its own number, has been added to gradually over the past 2 years, and now finally this map connects all the numbers and offers a wide variety of cycle routes in the surrounding areas. Cyclists can easily plot their own routes, choosing how long and far they wish to cycle, or there are also 10 suggested routes varying in length and difficulty; the shortest route is 25km with a 639m total height difference; the longest 99km with a whopping 3094m total height difference. Sights and places of interest along the way are also marked on the map, which, from this week, can be obtained free of charge from the Radovljica Tourist Information Centre. I have personally cycled all but one of the routes, the exception being the longest one although I have cycled most of that one too, and would be hard pushed to choose a favourite as each one is wonderfully scenic and varied.

Also coming up this week:

On Saturday 13th there will be a concert performed by the Lipnica choir, to mark the day of the local holiday celebration. The concert will take place under the village linden tree in Kamna Gorica, beginning at 5pm and is free for all to enjoy.

At Bled Castle on Tuesday and Thursday this week there are medieval and renaissance performances beginning at 5pm – http://www.bled.si/en/events/2014/09/09/1875-Medieval-performances-at-Bled-castle 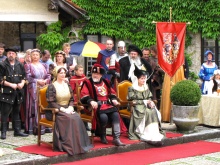 Right, I’m off for a walk to make the most of this glorious sunshine – wow, I haven’t said that for a while!!!