I’ve had a bit of a cold hanging around for the past few days, maybe the weather is to blame due to a week of temperatures in the mid-twenties followed by half a week of rain and temperatures barely reaching 10 degrees. This week, however, with the exception of a blip yesterday, it looks set to warm up again and hopefully I, and the weather, are now on the up!

I’m not good at being ill so, unless I’m really at death’s door, I still prefer to get outdoors in the fresh air rather than be cooped up indoors. Though, since I was feeling a bit lacklustre I needed a more gentle alternative and therefore a trip to the Pokljuka plateau was just the ticket. The vast plateau really does offer something for everyone. I usually go for longer hikes and baulk at the thought of driving part of the way, but this time I did let the car take some of the strain! There are endless places to walk of all lengths and difficulties, though, it is best to stick to marked paths and forest roads as one could very easily get lost in the great swathes of forest. Nevertheless, it doesn’t really matter where, how far, or how high, you go on Pokljuka, every path offers its own magic.

I began by driving past the Kranjska dolina highland, from where Stol, the highest peak in the Karavanke, can be seen in the background.

Next I set off, on foot, towards Lipanca and the Blejska koća mountain hut. However, instead of continuing up to the hut, I took another path back down to rejoin the road, reaching one of my favourite highlands, Planina zajavornik. The whole of Pokljuka lies within Triglav National Park, which means there are certain rules to abide to protect nature and, as can be seen below, there are bears in the area, though the chances of meeting one are probably one in a million! 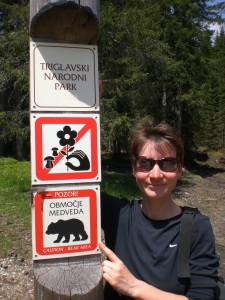 I then enjoyed a rest in the sun among the wildflowers. The sun was lovely and warm though the wind was a bit nippy hence why I’m wrapped up in an old bivvie bag! There are a smattering of small wooden houses on the highland and, during the summer months, cheese, yoghurt and sour milk can be bought direct from the herdsmen. 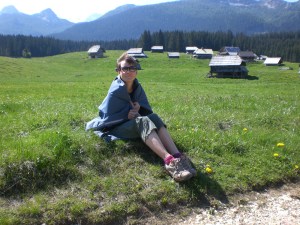 On Saturday it was the main day, Market Day, of this year’s Ceramics Festival in Radovljica. Aside from the monster of a hail storm early afternoon, it was a fine day that drew visitors – locals and tourists alike – to browse and buy from the stalls where they could chat directly with the ceramists themselves. There were also workshops, for adults and children, for those interested in having a go at making something for themselves. The Festival was officially opened on Thursday at an event attended by Radovljica’s Mayor and the ceramist Grainne Watts from Ireland whose exhibits could be seen in the lobby of the Radovljica Mansion. 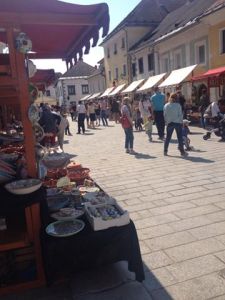 As a collector of elephants, though I don’t actually recall when or why I started collecting them, these colourful ornaments caught my eye.

Later on Saturday, as part of Vurnik Days (Vurnikovi dnevi), the event ‘Pozdrav trti’ (A Toast to the Vine) took place at Kunstelj Inn in Radovljica. The vine is in the garden at Kunstelj Inn which offers great local food and one of the finest views in town. The vine, of the original variety Žametna črnina, is a descendant of the world’s oldest vine (as recorded in the Guiness Book of Records) which is found in Slovenia’s 2nd biggest city, Maribor.  More information about Kunstelj Inn can be found here – http://www.kunstelj.si/