There’s a lot happening, and a lot to look forward to, in Radovljica and the surrounding areas in these coming days. The event that has got the town folk’s tongue wagging is the forthcoming concert by one of Slovenia’s most popular singers, Jan Plestenjak. The concert will take place this Saturday, 21st December, at 8pm in the Radovljica School of Hospitality and Tourism (Sredna gostinska in turistična šola). Tickets can be purchased from Tourism Radovljica or the Eventim.si ticket booking website.

Another date for the diary is the Advent Fair which will take place in the old town centre of Radovljica, beginning on Friday 20th December and running daily until the 24th December. Various accompanying events will also take place including the arrival of Santa Claus on Friday at 5.30pm and other musical and theatrical street performances taking place throughout the five days. More about the Advent Fair, opening times and events can be found here – http://www.radolca.si/en/what-to-do/events-1/advent-fair/83/110/

I have never particularly enjoyed shopping but I had to do a bit of the dreaded and unavoidable Christmas shopping last weekend so I made a brief visit to Kranj, which is just 15 minutes by car or train, from Radovljica. Kranj is the capital of the Gorenjska region, the northwest part of Slovenia. There are several shopping centres there so you can pretty much find everything you need there these days without having to drive further into the capital, Ljubljana. I’m not a fan of big, soulless, out-of-town shopping centres and personally I much prefer wandering around old town centres, browsing the individual stores, interacting with their owners and savouring the atmosphere and the historic buildings. However, sadly the shops in the old town of Kranj, as like in so many town centres these days, and not just in Slovenia, are becoming fewer and fewer as businesses move out of town and/or close down due to lack of passing trade. It’s such a shame but a sign of the times. However, a wander through the old town of Kranj is still pleasant, as can be seen by this video which I saw this week, which shows just what the area has to offer – http://www.youtube.com/watch?v=uP44eAC5F10

Apart from shopping and working, I have of course found time for some recreation too. The first part of last week saw glorious sunny, dry weather only to be somewhat spoilt later in the week, and over the weekend, by the low cloud which lingered over the valley shrouding us in darkness and bone chilling cold. However, accustomed to this as I now am, I knew that I wouldn’t have to go far to get above the cloud and fog and be bathed in brilliant sunshine with that super smug feeling of being almost literally ‘on top of the world’, as can be seen in these pictures below taken on Saturday during my hike up to Dobrča.

This week, I also went to Lipnica Castle, also known as ‘Pusti Grad’, which means ‘deserted castle’. I made a circular trip from home, first walking down to the Sava river and crossing it via the Fuxova brv suspension bridge, before walking through the forest on the Natural Science Trail to the ‘Galerija‘ area and onwards to the castle. I particularly like walking through the ‘Galerija‘ in summer as it remains cool, even on the hottest of days, so at this time of year it was certainly chilly to say the least, with icicles hanging from all the myriad rock formations. The area reminds me of something out of a Famous-Five or Secret-Seven book, books I enjoyed as a child – yikes, showing my age – as there are endless nooks and crannies ripe for exploration. 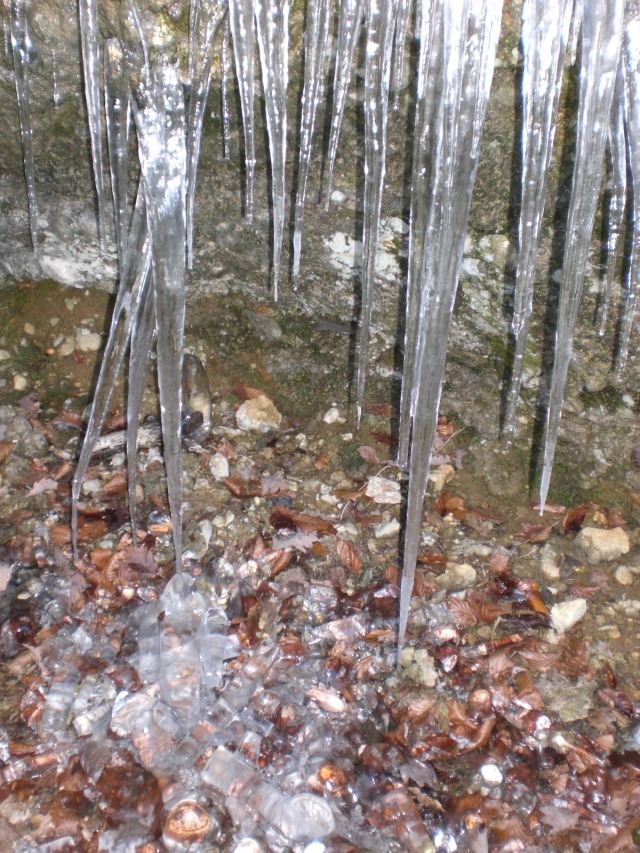 Today, only the remains of Lipnica Castle are still standing but nevertheless it makes a pleasant and interesting trip and there are impressive views over the Lipnica Valley and the Jelovica plateau. The first written records of the castle date back as far as the early thirteenth century when it was in the posession of the Orthenburg family, who were at that time the most powerful noble family in the Upper Carniola and Carinthia area. There is a legend that says there is a hidden tunnel that links Lipnica Castle with the town of Radovljica under the Sava river, but this story has not yet been confirmed by archaeological research. Maybe one day on one of my many walks, I might discover it for myself – now that would be something to blog about!