Ajdna is a peak, located at an altitude of 1064m, high above the village of Potoki. It is part of the Karavanke range, on the slopes of Stol which is the highest mountain in the Karavanke. On a clear day, as it was when I went this week, the views along the Upper Sava Valley, as well as across the Julian Alps, are magnificent and far reaching. 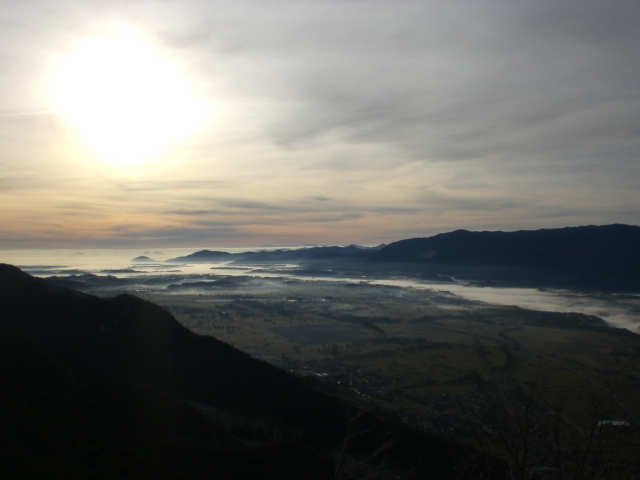 As well as being an interesting place to walk and to admire the views, there was another reason for my visit since last year, for my birthday, two friends gave me a necklace with a bird (as seen below), the symbol of Ajdna. Following that, we all planned to go together for a walk there but for a variety of reasons i.e. too hot, raining, busy etc. our trip never quite came to fruition. So this week, with the perfect (spring) winter weather we have been having, I decided that now was the time to go. Who would have thought that it would be possible in mid-January!

Today the site has been designated an archeological monument of great importance and has a protected status. The settlement that stands here is thought to be from the late Antiquity, though evidence, some of it dating back as far as the collapse of the Roman Empire (476 AD), shows that it may have been inhabited far earlier. The peak provided locals with an excellent refuge from the troubles taking place down below in the valley, not to mention with excellent views too! Ajdna is also thought to be the highest lying settlement of its kind in Slovenia.

Excavations didn’t begin here until 1976 and since then remains of weapons, jewellery and other household objects, as well as many graves, have been found, some of which are now on display in the Gorenjska Museum in Kranj. It is thought the site was home to around 100 people. Today many well-preserved buildings still remain and there are photographs and posters documenting the finds.

There are several ways to reach Ajdna, depending on which direction you are coming from and also depending on how far you want to walk. There is a path which leads directly up from Potoki or from Završnica, in the direction of the Valvasor mountain hut.

Since it was a lovely day and I fortunately had time on my side, I started from Žirovnica and made a long walk of it. First, I climbed the stairs adjacent to the water tower, through the tunnel and continued on the path to reach the Završnica reservoir. From here I followed the marked path as if going to Valvasor dom, turning left on the mountain road approximately 15 minutes beneath Valvasor dom. From here its along the road for approximately 15-20 minutes until the junction with the turn off marked for Ajdna. The path at first goes downhill, through the forest, until reaching the base of the peak. From here there is a choice of the harder, climbing path (15 mins) or the easier path (20 mins). I chose the harder path up and the easier path down. The path up, though not technically difficult, does require sturdy footwear, a steady hand, concentration and no fear of heights as it leads directly up the rock face – but it is well-equipped with steel cable and foot and hand holds. For those not so keen on such ascents, or those with small children, take the slightly longer path to the right, which though easier, also requires a degree of concentration as the area is quite exposed and prone to rockfall. Whichever way you reach it, you will be richly rewarded for your efforts! I will gradually be adding more photos of this, and some of my other trips, on my Pinterest profile too, just click here – http://www.pinterest.com/adeleinslovenia/

So, as you can see from the photos, there is still no snow here in the valley. For the first part of this week, some rain is forecast, with snow at around the 1,000 metre level. For anyone booked to ski at Kranjska Gora, I’m afraid to report that it is pretty green there. However, I’ve heard that some of the hotels are arranging shuttles to alternative ski resorts either within Slovenia or to nearby Austria or Italy so all is not lost. At Vogel and Krvavec however, there is plenty of snow and they are having a great season and with Slovenia being such a small country, its quite easy to get from resort to resort, without long distances involved.

If you are visiting the area, whether to ski or not, there are of course plenty of other things to see and do to. Take a look back through some of my previous posts for some ideas. I’ve covered a pretty wide spectrum about Radovljica, where I live, but also about many other areas around the region and even further afield.

This week there will be a FREE guided tour of the medieval old town of Radovljica on Tuesday 14th January at 10am. There is also an outdoor ice rink in Radovljica, open weekdays from 3-6pm, weekends from 10-6pm. Entrance is free for children up to the age of 18 (with their own skates) and just 2 euros for adults. On Thursday 16th there will be a public production by the Avsenik Music School in Begunje beginning at 6.30pm at the Avsenik Museum – entrance is free.