A double whammy of blogs this week, for two reasons: the first being that I simply couldn’t wait until next week to share my enthusiasm about the Pr’Kovač Inn, in Kropa, which also just happens to be one of my favourite villages around the Radovljica area; secondly, because there is so much going on at this time of year I have far too much to write about for just one blog! Perhaps I might also provide you with some inspiration for where to visit this weekend too.

I always enjoyed visiting Kropa; more often than not I visit by bike, either as part of a longer ride elsewhere, such as over Jamnik, or for a hike up to the Vodiška planina highland. From Radovljica is it 10 kilometres to Kropa via the road through the tranquil Lipnica valley.  Kropa’s somewhat isolated position, nestled at the foot of the far western edge of the Jelovica plateau, is also part of its appeal, together with its rich architectural and cultural heritage which make it unique, charming and characterful. The village is known as being the cradle of iron forging in Slovenia and this is evident throughout the entire village where each house is adorned with some kind of ornate iron work and the village is full of interesting sights such as the rushing waters of the Kroparica stream, the two churches and various sculptures and memorials. Interestingly, in 1953, Kropa was also the first village in Slovenia to receive the status of being a protected cultural monument.

There’s also so much more to see and do in Kropa, such as:

* A visit to the Museum of Iron Forging

* Visit the headquarters of the wrought-iron company UKO

* See the source of the Kroparica stream

* Visit the Vice-Spike foundry (by prior arrangement only)

The Pr’Kovač Inn is located right in the heart of the village and as soon as you enter through its door, you get a sense of what is to follow. The décor and the ambience just smack of good, honest, uncomplicated home-cooking and hospitality, and it doesn’t disappoint. Its all in the detail even down to the the crockery, cutlery, menus and presentation. In fine weather, a seat outside in the shady area next to the Kroparica stream is also pleasant, though do be sure to go inside a take a look! 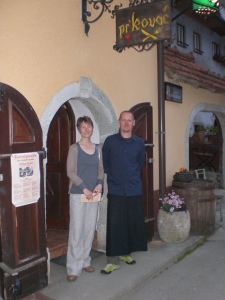 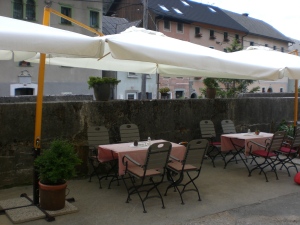 Owned and run by Blaž Staroverski (seen with me above), the restaurant also recently received rave reviews and top marks in one of Slovenia’s leading newspapers, and since it is also one of the seven restaurants that participate in Taste Radol’ca, and being one that is still remaining on my list, a visit was long overdue.

Being a unique village, Kropa also has some original local dishes and therefore I left it to Blaž to acquaint me with a few tasting samples of just some of the dishes available on the menu. With Kropa’s mere existence being based on the tradition of blacksmithing, most of the population would have, to some extent, been involved in hard, physical labour and thus required robust, hearty food. This tradition still continues, however, under Blaž’s leadership, he manages to create robust, hearty dishes with modern innovation and finesse – and all using the freshest and most local ingredients available.

Although I didn’t have an opportunity to try it on this occasion, since it was fresh out of the oven and baked to fulfil an order, the HUGE tarragon potica, as seen in the photo above looks a-m-a-z-i-n-g! I shall definitely be returning to test that sometime soon!

An ideal time to visit Kropa is during the time of the annual Iron Forging Festival, which this year takes place on Saturday 5th July. More information can be found here – http://www.radolca.si/en/what-to-do/83/iron-foging-festival-2014/83/153/