Following a spectacular storm on Sunday evening, Monday morning saw a rather chilly start to the new week with even a sprinkling of fresh snow on the top of Stol, which I wrote about last week, and more than a sprinkling in the high mountains. If you use Facebook, check out the photo I posted of the snow at the Kredarica mountain hut, beneath Triglav. Thankfully, the forecast for the rest of the week looks more promising with temperatures set to soar.

After a successful introduction last year, this year the new Radol’ca Hop-on, Hop-Off Bus will be operating throughout the summer from the 1st July to the 31st August and will cover two local routes now including Bled:

In addition, this year, for the first time in 23 years, a special bus will operate at weekends from Bled to Bohinj and Pokljuka within Triglav National Park: 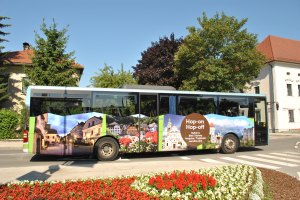 The price of a one-day ticket is just 5 euros per person with children under the age of 10 travelling for free.

In addition to being able to get on and off the bus at various points and see the towns and sights of interest, there will also be addition benefits to travelling by the bus, such as free or reduced entrance fees to museums and galleries, guided tours of the towns and villages in the area, gingerbread, cookery and candle-making workshops (supplement payable), walking paths and more. Of course, it’s also a more relaxed way to travel with time to sit back and enjoy the sights, and more environmentally friendly too – so a win, win all round!

On Friday I attended the opening of the new Fitness Trim Trail in Bled on the small Straža ski slope. During the summer Straža operates as a toboggan track and there is also the Bled Adventure Park and two snack bars. As well as the various activities, Straža is also a pleasant place to visit for a walk and it is well worth making the effort to walk up to the top (or take the chairlift if that sounds too much like hard work!) for the views over Bled lake, the castle, the Karavanke mountains which are quite stunning.

Another new addition to Straža is the Land of Slovenian Folk Tales, as seen below, and more information here – http://www.bled.si/en/events/2014/07/05/1904-Land-of-slovenian-folk-tales 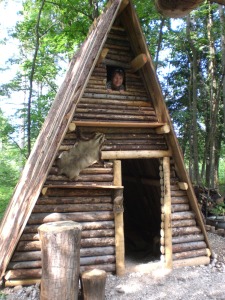 Straža is also synonymous with the Swiss doctor Arnold Rikli. Born in 1823, Rikli was largely responsible for the beginnings of Bled’s boom in tourism. His focus was on ‘healing tourism’ as he worked and learned the value and benefits of the climate and natural gifts of Bled. His work was guided by the principle: ‘Water works wonder, air can do even more, but light does the most of all.’ He founded the Institute of Natural Healing and introduced a new method of treatment. In 1859, Rikli ordered the building of simple wooden Swiss style baths (opposite the then Park Hotel) and also constructed huts for patient accommodation.

Walks around the Bled area were a key part of Rikli’s healing programme. There were strict house rules that all patients had to observe. Early starts (5-6am), followed by walks and outdoor physical activity. To improve their circulation patients walked barefoot and during the day they bathed, sunbathed and rested. Treatment helped diseases such as rheumatism, migraines, insomnia and obesity, Rikli’s methods became very popular and successful and through this, Bled became known far and wide. Today, his methods are still celebrated and remembered, particularly at the time of the popular annual Rikli Walk which takes place this coming weekend on Sunday 6th July. Anyone can join in the walk and it’s a great chance to see other parts of Bled, such as Straža and the Osojnica hill, as well as experiencing some of Rikli’s methods. Be prepared for some bathing, barefoot walking and fun! The walk begins at 7am in front of the Golf Hotel.

Here’s a small pick of this week’s forthcoming events:

Thursday 3rd July at 9pm (and every Thursday during July and August): Join the Triglav National Park rangers for ‘Storytelling by the Fire’ at the Šobec campsite – Listen to the myths and fairy tales of the Slovene mountains. The event is free and is in both English and Slovene.