I’m afraid it will be at least 6 weeks or so until I’ll be able to blog about any of my latest hikes and adventures as, unfortunately, on Monday last week I fell on ice and now have a fractured humerus – which believe me is anything but ‘humorous’!

If I wasn’t already paranoid enough about ice, now I will be even more so and this year, since the snow fall at the end of December, the ice has been particularly bad, though, following heavy rain this past weekend much of it in the valley has, thankfully, finally melted. I wasn’t doing anything dramatic or particularly adventurous when I fell and, annoyingly, had had my crampons on until just minutes before, having removed them for the final part of the path down which, being on the sunny side, had been ‘ice-free’ – or so it seemed – for a week or so. However, there was just one small spot, just a few metres, where there was a little ice mixed with mud and that was my downfall – literally.

At first I thought/hoped I might have just torn the tendons and was praying the pain would dissipate. However, some hours later it was evident that wasn’t going to happen so it was time for the inevitable trip to the on-call doctor, followed by x-rays at A&E, to confirm that, yes, I had actually broken a bone. ‘Bugger’ – just one of the expletives I might have uttered and probably the only one that is suitable for print!

So now follows 6 long, frustrating weeks of being one-armed which, when you live alone, is anything but easy. Simple, every day tasks become torturous, not due to pain – thankfully and strangely it doesn’t really hurt – just due to the length of time it takes to do the simplest of things; getting dressed, showered etc. Still, I’m trying to remain as upbeat as I can and at least I can still get outdoors for a walk, albeit not exactly the type of walk I would choose and running and cycling are off the agenda, though, being winter I wouldn’t be doing much of that anyway.

The place I fell was on the path to St. Peters Church (Sv. Peter) above the village of Begunje which is a really popular place to hike among the local population. There are a number of routes up to the church but I usually favour the direct, steeper route which leads up from near the post office in Begunje. It takes about 30 minutes to reach the church and a further 5 minute level walk leads to the Sankaška hut (Sankaška koča) which has a terrace with amazing views over the whole valley and where tasty soups, stews and strudel can be enjoyed. This place is popular all-year round and, particularly at weekends during fine weather, its pretty much guaranteed to be buzzing. Another popular route up to the church begins from the Krpin Recreation Centre a little further on through the village. Don’t be put off by my fall – it was just one of those unlucky things –  so if you are visiting the Radol’ca area, I’d definitely recommend a trip up to St. Peter’s Church and to the viewing terrace at the Sankaška hut. You can read more about St. Peters Trail here – http://www.radolca.si/en/st-peters-trail-begunje/ and about St. Peter’s Church here – http://www.radolca.si/en/begunje-church-st-peter/

Here are a couple of photos of me on a winter’s hike – taken a couple of year’s ago – to the very same place – believe it or not! 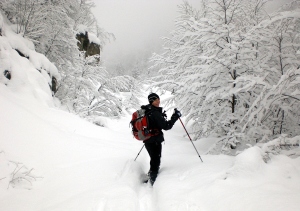 I will, of course, still be blogging – what is it they say about ‘not being able to keep a good man/woman down’? In the meantime, I’ll also be getting my thinking cap on, availing of public transport (driving is now out of the question too) and being thankful, once again, that I live in Radovljica which is well served by public transport and offers plenty of places to walk – even for those of us who are, temporarily at least, somewhat less mobile.

Hot off the press news – the new ‘Taste Gorenjska’ (Okusi Gorenjske) brochure has just been launched and, having been involved in its preparation, I think it looks rather good! The cuisine of each area of Gorenjska is presented with featured special dishes. You can pick up a copy in local tourist offices or the online version is available here – http://issuu.com/bledtouristboard/docs/okusi_gorenjske_a4_ang