The British media have done some of my work for me this week thanks to the 2 glowing articles about Slovenia published in the press last week. I was delighted to see that Radovljica also made it into the list of places to see, as well as the usual and much written about destinations such as Ljubljana, Postojna caves and Bled – so, for a change, its not just me extolling the virtues of Radovljica! You can read both the articles using the links below:

I must admit to having slightly mixed feelings about such media coverage. It’s great for Slovenia’s tourist industry and, one hopes, for the economy – which is in dire need of a boost. However, part of me also hopes that the country won’t become too popular and too over-run with tourists so it can remain as beautiful and pristine as it is. It is, of course, inevitable that visitor numbers are growing, and will continue to grow. Lucky then that I know of SO many more places worth visiting too, those hidden corners, away from the tourist hotspots, which part of me wants to keep secret but every so often I’m willing to share!!!

This weeks ‘sharing’ is about 2 of Slovenia’s lesser-known lakes that I visited last weekend. Offically the country has 321 bodies of water, though this includes some ‘lakes’ that are intermittent and some of them are barely more than large puddles. One of these, are least at first sight, is the karst Podpeč Lake (Podpeško jezero) which lies on the outskirts of Ljubljana, in the area of the Ljubljana marshes (Ljubljansko barje) in the village of Jezero near Podpeč – hence the name. Despite its modest size, it is actually classified among the deepest ‘lakes’ in Slovenia due to an underground outflow which leads to a funnel which has, thus far, been explored to a depth of 51 metres. It takes all of 5 minutes to see the lake, though one can take a walk on the road which leads around it, and there are also numerous paths which lead up through the forest including the one I took up to St. Ana’s Church (Sv. Ana) which stands on top of a hill at 484m. A church was originally erected here sometime in the 11th or 12th centuries, however, the church in its current form dates from 1883 when it was renovated in the Baroque style. It only takes around 30 mins to reach the church from the lake and it is well worth the effort for the panoramic views in all directions. The lake is also one of the start points for the longer hike up to Krim (1107m) which is the highest point in the Ljubljana basin and is easily recognisable due to the attenae which stand atop it and is a popular hiking destination for those living in, and near, Ljubljana. When I visited it was a spring-like day and it was wonderful to see snowdrops coming into bloom as where I live they have yet to creep out of their winter slumber. Unfortunately, it was also very hazy and my amateur photos really didn’t capture any of the views so I’ll jsut post these 2 as a taster! 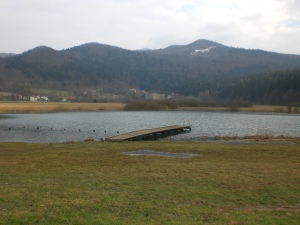 The other lake I visited this weekend is somewhat larger and closer to home, the Black Lake (črno jezero) in Preddvor, in an idyllic setting at the foot of the Storžič and Zaplata mountains. The lake is a popular destination for a short stroll as well as being the starting point for many hikes in the surrounding hills and mountains. Next to the lake is the Bor Hotel and the 16th century Hill Castle (Grad Hrib); I also particularly like the tree-lined Castle Avenue (grajski drevored), as seen below, and can imagine many a romantic wedding photo being taken here. On the path in the woods just beyond the lake, there were hundreds of beautiful crocuses which are really a sight for sore eyes after months of seeing just snow and ice.

It may look, from the photos above, as if there is very little snow remaining, however, these mountains are south facing and up to around the 1000m level, much of the snow has melted. However, in shaded and north facing areas, there is still snow at around the 700m level so caution, and a small pair of crampons, should definitely be in your rucksacks at this time of year when hiking. Nevertheless, meteorological spring has officially sprung and, despite this week colder temperatures and possible snow to ground level being forecast, spring is definitely on it’s way – hooray!