The Rogaška Health Spa and Park is probably the most known among Slovenia’s many spas. This unique resort has a 400-year tradition and attracts guests from all over the world who wish to benefit from its healing restorative, relaxation and medical programmes.

During my visit I stayed at the beautiful, timeless, Grand Hotel Rogaška, which is just one of the luxury hotels set around the park.

The Grand Hotel is particularly known for its Crystal Ballroom, where weddings, celebrations and other events are regularly held. The hotel’s Spa and Beauty Centre is housed in a former ‘health house’ from the 19th century, which nowadays offers a comprehensive range of professional cosmetic and medical procedures, as well as relaxation in the thermal pools and saunas.

The town of Rogaška Slatina is dominated by the Rogaška Wellness Park, the surrounding hotels and the vast 12-storey Medical Centre which carries out all manner of health programmes including cardiology, gastroenterology, urology, and dermatology, as well as beauty and rejuvenation treatments. The basis of all medication treatments is the curative powers of Donat Mg water, which contains magnesium and, even in small amounts, can contribute to the healing of various ailments. The miraculous power of Rogaška mineral water was first analysed by alchemists back in 1572 and is known to contain 1000mg of magnesium per litre. 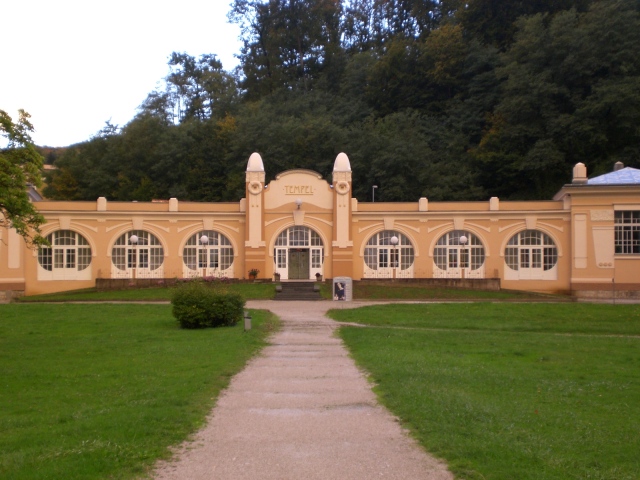 The Tempel building houses a gallery and shops

The positive effects of Donat Mg mineral water have been scientifically proven. It has been shown to act against stomach acid and stimulate the emptying and biliary secretion of juices of the pancreas. Minerals are absorbed in the small intestine; healthy kidneys eliminate any surplus of absorbed minerals.

As seen below, each patient receiving treatment is allocated their own numbered glass and then must drink the required amount of Donat Mg, according to their personalised plan.

As well as the facilities in each hotel, the Rogaška Riviera thermal pools (unfortunately closed during my visit) are just a few minutes walk from the park. These pools can also be used by visitors who are not staying in the resort hotels and comprise indoor and outdoor pools and whirlpools where the special thermal-mineral water – containing sodium, potassium, calcium and magnesium – contributes to a feeling of relaxation and regeneration and is particularly benefits for diseases of the joints and soft tissue.

But that’s not all! The town of Rogaška Slatina is also home to the Rogaška Glassworks, which has been producing its well-known and highly-regarded crystal products for over 350 years. Although I didn’t have time during my visit for a factory tour, I did pop in to the shop and couldn’t resist a purchase or two! 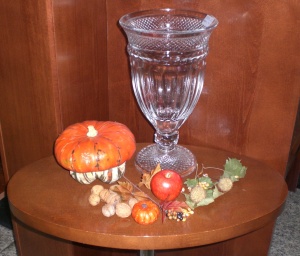 Rogaška is surrounded by beautiful nature. There are 9 marked walking trails, which begin directly from the centre and vary from less than 2kms up to almost 15km in length. There’s even a small ski slope, Janina, though at just 362m I can’t imagine an awful lot of skiing goes on there! A great way to see the town in all its glory is to get up above it, as I did by walking on trail number 6 to the hill Tržaski hrib – well worth it for the view. 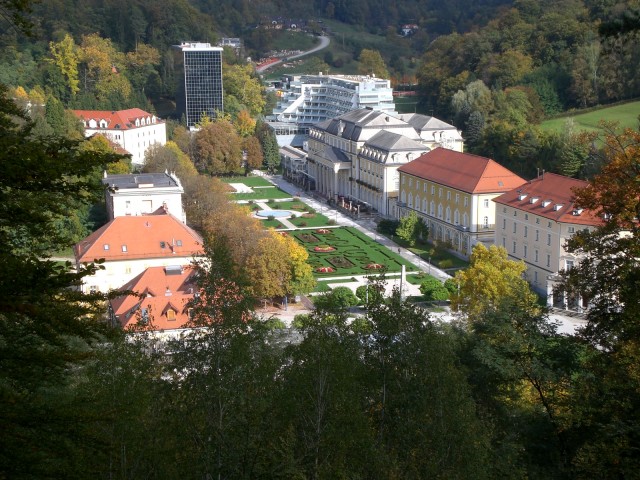 Just behind the medical centre is St. Anne’s Chapel, which I was rather taken by as its stone facade is somewhat unusual in Slovenia – more akin to an English style church. It was built in 1804 and in 1926 was renovated according to plans of Slovenia’s great architect, Jože Plečnik. Close by is Ana’s Mansion and Museum (Anin Dvor), a brand new building which is a cultural-tourist centre housing various collections and exhibitions.

The Boč Nature Park is home to the peak of Boč (978m), the last peak in the Karavanke mountains. A viewing tower stands at the top, whilst the popular mountain hut on Boč (Dom na Boču) sits somewhat beneath the peak at 698m. Unfortunately the weather shattered my plans to hike up there, though I did walk a little of the way – via the road since it was raining – and at least managed to catch a brief lull in the rain for this rather dramatic looking shot below.

Rogaška really does offer something for everyone; those in need of medical treatment, those wanting to improve their health; those wishing to escape from the stress of every day life; and even those – such as myself – who aren’t very good at relaxing but nevertheless want to enjoy some recreation (and a tad of relaxation!) in the wonderful green surroundings.

The British media have done some of my work for me this week thanks to the 2 glowing articles about Slovenia published in the press last week. I was delighted to see that Radovljica also made it into the list of places to see, as well as the usual and much written about destinations such as Ljubljana, Postojna caves and Bled – so, for a change, its not just me extolling the virtues of Radovljica! You can read both the articles using the links below:

I must admit to having slightly mixed feelings about such media coverage. It’s great for Slovenia’s tourist industry and, one hopes, for the economy – which is in dire need of a boost. However, part of me also hopes that the country won’t become too popular and too over-run with tourists so it can remain as beautiful and pristine as it is. It is, of course, inevitable that visitor numbers are growing, and will continue to grow. Lucky then that I know of SO many more places worth visiting too, those hidden corners, away from the tourist hotspots, which part of me wants to keep secret but every so often I’m willing to share!!!

This weeks ‘sharing’ is about 2 of Slovenia’s lesser-known lakes that I visited last weekend. Offically the country has 321 bodies of water, though this includes some ‘lakes’ that are intermittent and some of them are barely more than large puddles. One of these, are least at first sight, is the karst Podpeč Lake (Podpeško jezero) which lies on the outskirts of Ljubljana, in the area of the Ljubljana marshes (Ljubljansko barje) in the village of Jezero near Podpeč – hence the name. Despite its modest size, it is actually classified among the deepest ‘lakes’ in Slovenia due to an underground outflow which leads to a funnel which has, thus far, been explored to a depth of 51 metres. It takes all of 5 minutes to see the lake, though one can take a walk on the road which leads around it, and there are also numerous paths which lead up through the forest including the one I took up to St. Ana’s Church (Sv. Ana) which stands on top of a hill at 484m. A church was originally erected here sometime in the 11th or 12th centuries, however, the church in its current form dates from 1883 when it was renovated in the Baroque style. It only takes around 30 mins to reach the church from the lake and it is well worth the effort for the panoramic views in all directions. The lake is also one of the start points for the longer hike up to Krim (1107m) which is the highest point in the Ljubljana basin and is easily recognisable due to the attenae which stand atop it and is a popular hiking destination for those living in, and near, Ljubljana. When I visited it was a spring-like day and it was wonderful to see snowdrops coming into bloom as where I live they have yet to creep out of their winter slumber. Unfortunately, it was also very hazy and my amateur photos really didn’t capture any of the views so I’ll jsut post these 2 as a taster!

The other lake I visited this weekend is somewhat larger and closer to home, the Black Lake (črno jezero) in Preddvor, in an idyllic setting at the foot of the Storžič and Zaplata mountains. The lake is a popular destination for a short stroll as well as being the starting point for many hikes in the surrounding hills and mountains. Next to the lake is the Bor Hotel and the 16th century Hill Castle (Grad Hrib); I also particularly like the tree-lined Castle Avenue (grajski drevored), as seen below, and can imagine many a romantic wedding photo being taken here. On the path in the woods just beyond the lake, there were hundreds of beautiful crocuses which are really a sight for sore eyes after months of seeing just snow and ice.

It may look, from the photos above, as if there is very little snow remaining, however, these mountains are south facing and up to around the 1000m level, much of the snow has melted. However, in shaded and north facing areas, there is still snow at around the 700m level so caution, and a small pair of crampons, should definitely be in your rucksacks at this time of year when hiking. Nevertheless, meteorological spring has officially sprung and, despite this week colder temperatures and possible snow to ground level being forecast, spring is definitely on it’s way – hooray!