Laško is synonymous with beer, and, with it, the annual Beer and Blooms Festival (Pivo in Cvetje).

Though Laško beer is widely known, some perhaps might not even realise that Laško isn’t merely the name of a beer, it’s also a thriving, compact town – and a lovely one it is too! Laško is located just a 10 minute drive from Slovenia’s 3rd city, Celje, and is easily reached by taking the Celje exit of the Ljubljana-Maribor motorway. The town is also well connected by public transport, with fairly frequent trains from Ljubljana taking under 1.5 hours.

The best place to start a visit to Laško is at the tourist information centre, which occupies a prime position at the entrance to the town in ‘Trg Svobode’. The centre stocks a very comprehensive selection of souvenirs, beer-related or otherwise (I bought chocolate made with beer!), organises brewery tours (only offered for groups but even if you are alone, as I was, the centre will try to arrange for you to join another group), and offers bike rental, as well as an extensive range of information on what to see and do in the town and its surroundings. More information here – http://www.stik-lasko.si/en/ 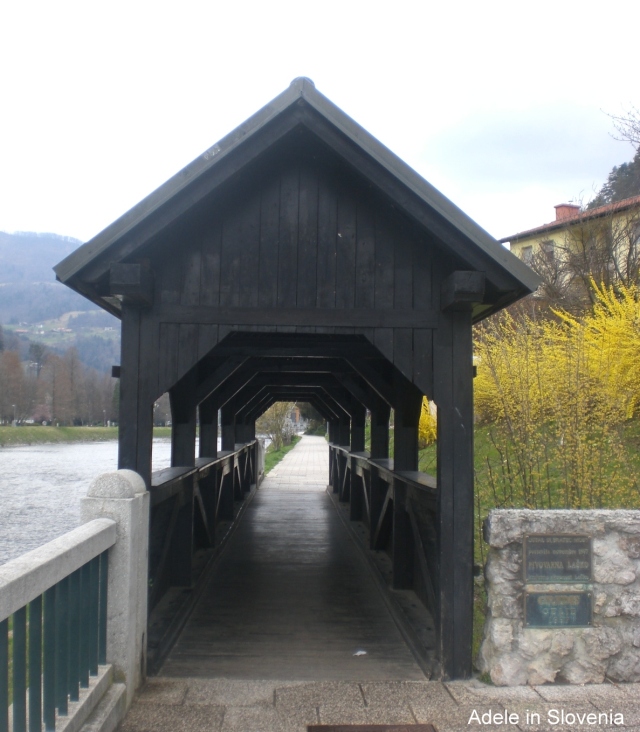 The Black Bridge, situated at the outflow of the Žikovca stream

Now, back to the beer! Beer drinkers in Slovenia usually belong to one of two groups, the ‘reds’ or the ‘greens’! The ‘red’ refers to Union beer – the brewery is based in Ljubljana, whilst the ‘green’ refers to Laško.

Laško beer dates back to 1825 when, Franz Geyer, a local producer of mead and gingerbread, founded the brewery, originally located in the Valvasorjev Spital building in the town centre, which is now a hotel. Geyer was later joined by the entrepreneur and developer Simon Kukec. Through the years the brewery has endured wars and economic crises, but has always managed to survive and even thrive. In 1944, when the factory was bombed, it was soon returned to its former glory and production restarted the following year.

Laško was the number one beer in the former Yugoslavia, which had a population of 22 million, and at the height of its popularity in the 1990s it was annually producing over a million hectolitres, with its beer being exported as far as India. Since Slovenia’s independence in 1991, and later the financial crisis, times have been tough for many of Slovenia’s companies, with many falling by the wayside, however, not withstanding a change of ownership, the Laško brewery has continued unhindered.

For many, a tour of the Laško brewery is high on the list of things to see and do, especially since, at the end of the tour, a tasting session is included! I can’t pretend to be a beer drinker, but that didn’t stop me going on a factory tour anyway! Brewery tours last around 2.5 hours, cost 8 euros, and include a visit to the Laško Museum, a guided tour of the brewery and a beer tasting session with savoury snacks.

You can get up close and personal with the ‘King of Beer’.

Technology in the factory means that the production process is far-removed from days gone-by. During my tour I could count on one hand the number of employees I saw as everything is automated. The actual recipe and ingredients, however, have remained largely unchanged. A case of ‘If it ain’t broke, don’t try to fix it!’

For a special treat visit the restaurant in Tabor Castle. The castle sits atop a small hill just immediately above the town centre. The castle is thought to date back to the 12th century, was razed to the ground by the Turks in 1487, and for the ensuing two centuries it remained in ruins. It was finally bought and restored by the Laško brewery in the mid-1980s. Today is houses an incredibly cute, teeny, not to mention popular, wedding hall (with the emphasis being on ‘teeny’ rather than ‘hall’!), and a fine-dining restaurant.

For a special treat visit the Pavus restaurant, within the castle, which is ranked as one of the top 15 restaurants in Slovenia and one of the Jeunes Restaurateurs of Europe.

There are plenty of walking and hiking paths in the immediate vicinity. A good way to get your bearings is to take a gentle stroll alongside the Savinja river. The small, well-kept city park, with a play area for children and abstract sculptures, is a nice place to linger in fine weather.

Just a couple of kilometres from Laško in the hamlet of Strmca I visited the Šolar beekeepers, where for over 30 years the owners have been keeping bees and producing ‘Lectar‘ – otherwise known as decorated gingerbread, most often in the shape of a heart. Visitors can also experience the benefits of apitherapy. Their honey biscuits (medenjaki) are award-winning and I was treated to a sample together with some delicious honey liqueur.

Now, getting back to the Beer and Blooms Festival. This year’s event will take place on 14th – 17th July.

It actually started out as just a local flower festival, but was later, from 1965 onwards, expanded to include live music, fireworks, parades, exhibitions, and, of course, beer!

Over 135,000 people visited the 2015 festival and 250,000 jugs of beer were consumed. Not quite on a par with the Oktoberfest, but in Slovenian terms this is a pretty major ‘Don’t Miss’ event, and the bonus is that the beer is a fraction of the cost of that in Munich!

The highlight of the event, and that which draws the largest crowds, is the spectacular firework display on Saturday evening, which can last up to half-an-hour.

As with all good festivals, camping is embraced and a special area is set up for tents. Those looking for more comfortable accommodation can stay at the one of the Thermana Laško hotels. The Wellness Park hotel has a thermal centre with indoor and outdoor pools and retractable glass dome, a modern sauna and wellness centre and several restaurants and cafes. More here – http://bit.ly/1qdgmX1