I celebrated my 7th anniversary in Slovenia this week – gosh, how time flies! I spent a pleasant evening with friends who ensured I didn’t spend it alone and who pronounced themselves, resplendent with badges, the official founders of the Adele in Slovenia Fun Club! I’m not yet entirely sure what being a member of this club entails, but watch this space!!! 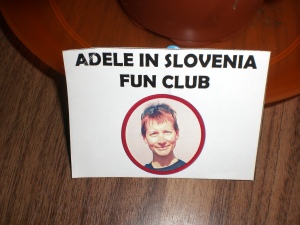 After what seemed like an eternity, although in reality it was only around three weeks, the sun finally made a very welcome reappearance  during the latter part of this week. Alas, it was somewhat brief, but it was much needed and almost at once it felt like the whole country, or at least this little alpine part of it, suddenly breathed a collective sigh of relief after the harsh bout of weather that Slovenia has had to endure during the past few weeks. There is, of course, still a huge clean-up operation taking place and, as is so often the case, once the media have left, little of the remaining work in clearing up after such a disaster, gets any coverage. Current predictions are that it will take at least a year for areas of forest that have been entirely, or at least extensively, devastated to be cleared.

I took full advantage of the few hours of brilliant early morning sunshine on Thursday and made a much longed for trip to Valvasor. Since the heavy snowfall and ice, which caused so much destruction, hiking had become pretty much a no-no, as most paths were inaccessible due to fallen trees. However, having asked around, I heard that the path to the Valvasor mountain hut (Valvasorjev dom), one of my regular winter haunts, was in good condition so I wasted no time in going. I certainly wasn’t alone and was surprised how many other people I met; skiiers, sledgers, hikers – no doubt all of whom had been (im)patiently yearning for some sunshine, much as I had. Incidentally, I noticed there is also now a new winter sports area, including a small cross-country skiing area, a children’s ski area, a sledging track and an ice-rink, located just 300metres from the Završnica reservoir. 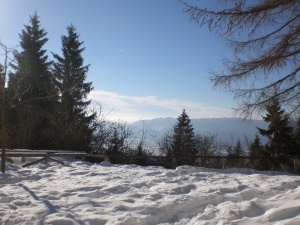 It occurred to me whilst listening to the news this week, which was once again dominated by bickering politians and the latest corruption scandals, that perhaps the only upside to all the recent weather related news was that the nation has had a brief respite from all the usual news – the same the world over no doubt! However, this week Slovenia has really had something to celebrate with our winter sports stars performing exceptionally well in Sochi. For the first time in the history of women’s downhill skiing, two gold medals were awarded as Slovenia’s Tina Maze and Switzerland’s Dominique Gisin recorded identical times and were named co-Olympic champions. Other Slovene medallists (so far) are Peter Prevc, silver in the men’s ski jumps, Vesna Fabjan, bronze in cross country skiing and Teja Gregorin, bronze in biathlon.

Here in Radovljica, preparations for this year’s traditional Shrovetide carnival, known here as ‘pust’ are in full swing. The street parade will take place on Saturday 1st March and is a spectacle of colours as the streets through the town are filled with a procession of floats accompanied by children (big and small!) dressed in handmade costumes and masks. The parade will start at 2pm and travel through the centre of Radovljica ending in the old town centre at Linhart Square. 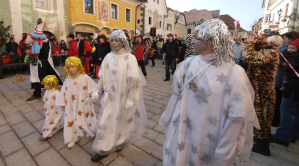 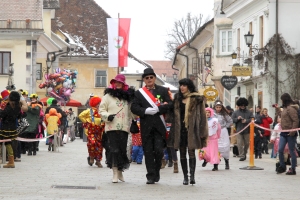 Additionally, this year a new event will be taking place in the Radovljica Mansion – the Pust Dance.   This unique event is aimed at reviving the tradition of pust whilst combining it with characteristic cuisine and adding a dash of humour to the times in which we live. For those attending the dance, masks will be obligatory and prizes will be awarded for the best ones. A meal will also be served, provided and cooked by the local restaurants involved in the Taste Radol’ca project. The entire evening’s entertainment, including a welcome drink, dinner, dance and guaranteed fun, will cost just 15 euros per person. More information and details about reservations can be found here – http://www.radolca.si/

I popped to the capital, Ljubljana, on Friday for a meeting and got ridiculously excited about seeing green grass! I’m not much of a city person usually but after seeing nothing but whiteness for some time now, the sights and sounds of the city were something to behold. Friday was of course Valentines Day too, so love was in the air – apparently! But then there’s always love in Slovenia since it’s the only country with ‘love’ in its name – sLOVEnia!

It’s school holidays for a week now and therefore the ski resorts throughout Slovenia, all of which are operating and have copious snow, will be in full swing. Meanwhile in Radovljica, the Olympic size swimming pool is offering free swimming for children all week from 9am – 11am; perfect for keeping the little ones occupied and out of mischief!