In last week’s blog I wrote about the St. Gregory’s Day celebrations which take place annually on the eve of St. Gregory’s Day, in this case, last Wednesday 11th March, in the villages of Kropa and Kamna Gorica. I was a little disappointed that due to work commitments I was unable to go this year, however, as luck would have it one of the locals from Kamna Gorica, put together this short video so I, and now you, can have a glimpse into the custom and see the colourful creations made by local children. https://www.youtube.com/watch?v=ABGRQ79oC7k&feature=youtu.be

What struck me initially on watching it is that it was still daylight, whereas last year when I attended on the same day and date -11th March 2014 – it was already dark. This year spring seems to have come early, and with it, longer and warmer days, and the forests are now carpeted with beautiful spring flowers. Ok, I know its a bit early to be celebrating spring ‘proper’, after all it could, and probably will, still snow. However, after last year’s washout of a spring and summer, this dry, mild(ish) period is much appreciated.

So, with spring in the air, my thoughts have started turning to cycling and I began dusting off my bike this weekend. After month’s of not cycling, and with a nip still in the air, the first rides of the year are always gentle ones, on flat, easy surfaces, such as from Radovljica via Lesce and Hraše to join the 12km-long Imperial Road (cesarska cesta), a gravel road that leads towards Žirovnica – http://en.zirovnica.eu/experiences/active-breaks/cycling/family-cycling-trips/along-the-imperial-road/

Another such flat(ish) and easy(ish), as well as being particularly scenic and traffic-free, cycle path is that from Bohinjska Bistrica to Bohinj Lake then onwards towards the villages of Stara Fužina, Studor and Srednja vas. The cycle path is well-marked and the views of the Julian Alps and the surrounding villages and lake certainly take your mind off the couple of short, but very steep, inclines. This section, seen below, leads from Srednja vas towards Studor. with the imposing Baroque St. Martin’s church on a small hill directly above the village. 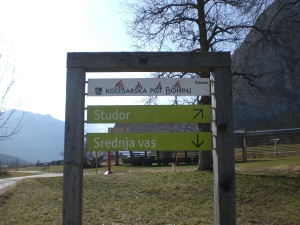 It’s worth making the short detour to see the church, which contains paintings by well-known Slovene artists, and also nearby is the Ribnica waterfall and the Bohinj Cheese Dairy (Bohinjska sirarna) where one can stop off to buy locally produced cheese (open weekdays 7am – 2pm).

Preparations are now in full flow for this year’s Radovljica Chocolate Festival. This event just keeps growing and growing in popularity, and this year it will be even bigger and better. The Festival will take place over 3 days (instead of the previous 2) from Friday 17 to Sunday 19 April and will also be extended to take place not only in the historic old town centre and the Radovljica Manor (grascina), but also in the Town Park. Read more about the Festival here – http://www.radolca.si/en/what-to-do/events-1/festival-of-chocolate/83/309/

4 thoughts on “Spring in Slovenia; cycling, flowers, chocolate and more!”