I was pleased to read this week that Adria, Slovenia’s national airline, is launching new flights from Maribor, Slovenia’s 2nd biggest city and 2nd largest airport, to Southend in the east of the UK. It’s not terribly helpful for me as my friends and family are scattered far from Southend, though, if the price is right it might be an option and hopefully for some – both in Slovenia and the UK – it will be a boon.

Southend might seem something of an odd choice – the airport is named ‘London Southend’ but a quick look at the map will reveal that it isn’t actually ‘London and isn’t actually even that close, being in the county of Essex. However, Central London can be reached in less than an hour and it will at least hopefully bring some much needed regeneration to Maribor and the Štajerska region as a whole. It also offers an alternative to the so-called ‘low cost’ airlines which, apart from the few months a year over the summer that Adria fly to Gatwick and Manchester, are currently the only choice to/from the UK. It looks the prices should be competitive too, which is even better. You can read more here (in Slovene)  -https://www.adria.si/sl/novice/2015/nova-redna-letalska-povezava-adrie-airways-iz-maribora-v-london/

On Saturday I visited the Stara Sava area of Jesenice, 20 mins by car from Radovljica or just a few stops on the train, to look around the museum area and the St. Jožef’s Fair, held annually to celebrate the municipal holiday and the patron saint. Granted, from the outside Jesenice really doesn’t appear to have much going for it, dominated as it is by the chimneys and pluming smoke from the Akroni steel factory, however, the town is surrounded by some wonderful nature and the Stara sava area in particular has been nicely restored and exhibits the technical heritage of the area. The area comprises the 16th century Ruard Manor, the 17th century Church of St. Mary’s Assumption and typical worker’s houses from the 18th century, as well as being the museum, cultural and tourist centre of the town.

There was a small market selling a range of typical Slovene goods including ‘suha roba’, meaning ‘woodenware’, which are traditional handmade wooden products, originally made in Ribnica in the southeast of Slovenia, where the tradition dates back as far as the 14th century. These days suha roba products can be found on sale from mobile vans, stalls, and even hawkers who walk around selling the various products hanging from their every limb, at many markets and other larger events throughout the country. If you are looking for a gift to take home for friends or family, you will surely find something; kitchen implements, garden tools, toys, small items of furniture, and myriad other useful household objects. 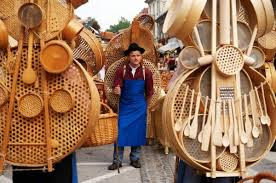 It’s now only 24 days until the 4th Radovljica Chocolate Festival – not that I’m counting or anything! If you share my love of all-things chocolate, take a look at this short video of last year’s event to see why its become so popular. Hope to see you there – but you’d better get there quick before I eat ALL the chocolate! – https://www.youtube.com/watch?v=LHheIefC_-g