I know my blog is named ‘Adele in Slovenia’ so it may seem somewhat odd that this week I’m writing about Austria, but let me explain…

The Karavanke mountains form a natural border between Slovenia and Austria, and here in Radovljica we are fortunate to have part of the Karavanke range right on the doorstep. Particular favourites among locals, in which I include myself, are Stol (the highest in the Karavanke range) and Begunščica, whilst just slightly further afield there are other popular peaks such as Golica, Dovška baba and others.

Some of the territory which lies just the other side of the Karavanke, though these days geographically in Austria, was formerly Slovene and thus, even today, many Slovenes remain living in these areas and therefore places names and all official documentation etc. is found written in both Slovene and German languages. One of such places is the area just on the other side of the Ljubelj pass (more about this in a previous blog here – https://adeleinslovenia.wordpress.com/2014/09/01/zelenci-pools-ljubelj-pass-and-forever-young/), near Ferlach/Borovlje. Once through the tunnel and into Austria, its just a few minutes drive to the Čepa Gorge (Tscheppaschlucht in German – no idea how to pronounce that!). In addition to the gorge itself, there is also an Adventure Park within its grounds – run by a Slovene company!

The gorge has been very well arranged with wooden walkways, steel ladders and bridges. The walk involves quite a lot of going up and down but the amazing sights of the rushing water and canyons ensures it doesn’t feel like hard work, and also there are a number of choices of routes that can be taken in one direction with a bus journey (included in the entrance price) for the return journey. Be sure to pick up a bus timetable at the start so avoid a long wait, but fortunately, the bus stations are mostly sited at, or near, restaurants/inns, so even if you have a while to wait you have somewhere to wait and enjoy a drink, piece of strudel etc. 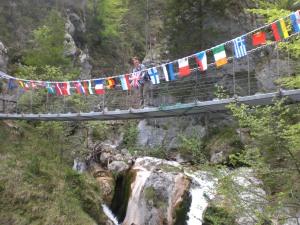 The new Sava River Trail (Pot ob Savi) will be officially opened this week on Thursday with a guided walk beginning at the Fux footbridge (Fuxova brv). This path is a great addition to the numerous paths available in Radovljica and the surroundings and will be a particularly pleasant place to walk in the heat of the summer as much of it runs through the forest and beside the Sava River. 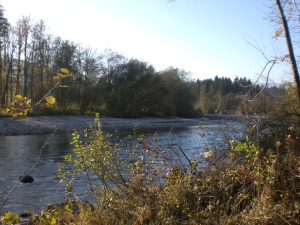