In the almost nine years I’ve been living here I’ve eaten at a lot of restaurants; some average, some great and some outstanding. However, I’d go as far as to say that the meal I had last week in the new Sova Restaurant and Wine Bar in Lesce was the best yet and I haven’t stopped raving about it since!

Lesce has an incredible 12 restaurants – or rather 12 eateries – as a couple are more snack bars than restaurants. When I say ‘incredible’ I don’t mean that they are all ‘incredible’ – some are obviously better than others – it’s just incredible that Lesce, which is something between a big village and a small town, has such a wide choice. I can’t help but wonder if they will all survive, as competition is now fierce, however I certainly hope this latest addition is here to stay.

I must confess that I’m not a great gourmet when it comes to the type of cuisine which is culinary art but you, or at least I, am always left wanting more and leave the restaurant hungry. The team at Sova, however, seem to have found the perfect balance between food that both looks and tastes amazing, comes in decent-sized portions and at prices that don’t break the bank.

The restaurant is run by the team who run Fine Food at Penzion Berc in Bled which is closed during the winter thus they sought out somewhere for the team to offer their fine food – and indeed it is fine food – over the winter. In fact, I couldn’t find fault with a single aspect of the meal, which is a rarity!

Perhaps the only negative aspects, though these are not food-related, are that the restaurant doesn’t have its own car park, doesn’t have any outdoor space and is rather small inside, meaning as and when word gets out and the crowds come flocking (and I believe they will!) we will probably be fighting over tables!

I started my meal with creamy truffle soup with prosciutto chips and profiteroles. 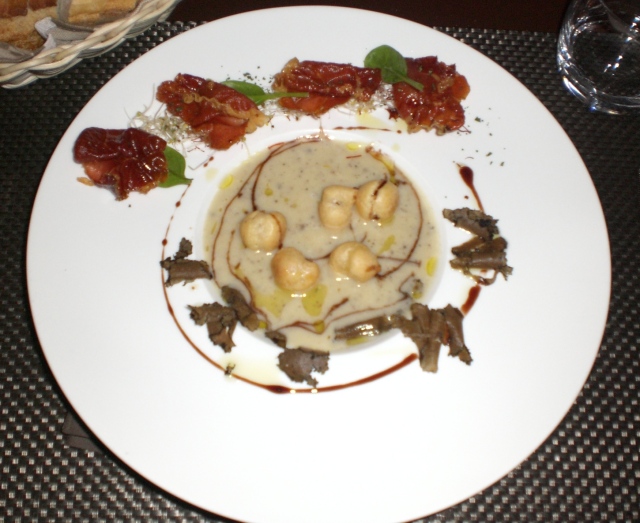 The main course was spicy slow-cooked and grilled pork rib with potato puree and garden vegetables.

And the dessert – yes, you know that is ALWAYS my favourite bit – was mango tiramisu with white and dark chocolate, homemade ice-cream and lavender crème brulee.

Since I enjoyed it so much, I went back again two days later! This time I tried the house pizza, which comes topped with aged gauda, basil pesto, baby onions, prsut ham, and more!

And I somehow found room to try out another pudding too! The chocolate bomb with chocolate mousse and forest fruits, with an added surprise element, which I won’t divulge as it wouldn’t then be a surprise! 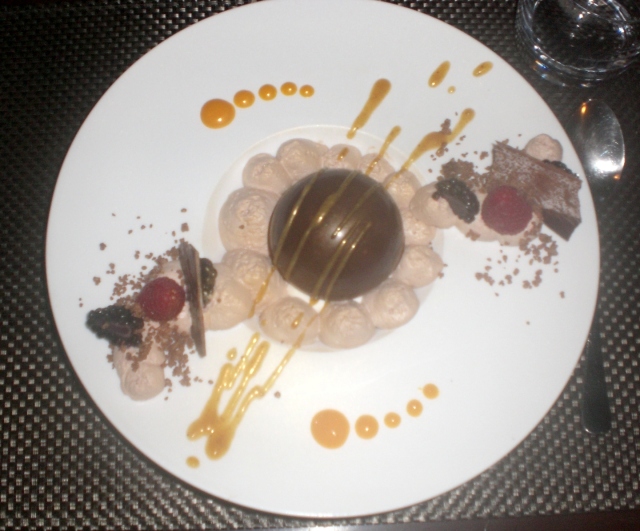 All being well, we will hopefully see Sova joining the Taste Radol’ca collective and you will also find some of their delights at this year’s Radovljica Chocolate Festival in April – http://www.radolca.si/en/what-to-do/events-1/chocolate-festival/83/309/