It might be quite a way to go to reach the village of Zali Log in the Selca valley (though, of course, that’s relative depending on where you live or are coming from!), however, the scenery along the way, the picturesque village and its houses with their prominent blue-grey slate roofs, and the Path to Suša – leading to the Church of Our Lady of Loreto – are among the reasons it is worth making the effort. 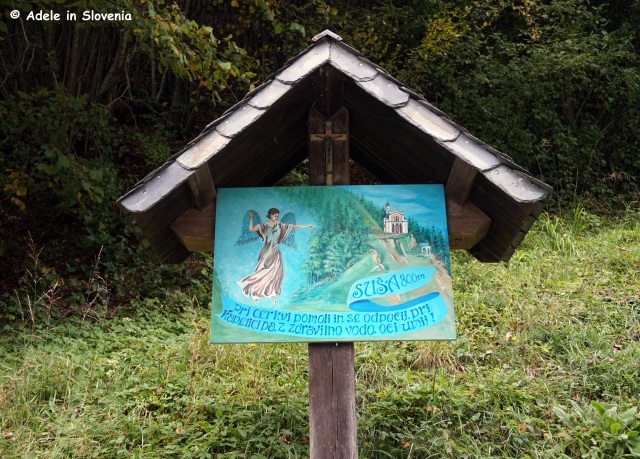 The village of Zali Log lies at the foot of Ratitovec, the highest mountain in the Selca valley, and is the last village in the level plain of the valley. The appearance of the village as it is seen today has changed little from when it was established in the 19th century.

Zali Log is also known for its slate roof tiles. In the 18th century, a special hard blue-grey slate was found on the slopes of Bintek (1000 metres above sea-level). The production of tiles for covering roofs from this slate began and replaced straw and shingle roofs, first in Zali Log and later throughout the valley. The tiles from Zali Log slate were of very high quality and were able to withstand the weather conditions for generations.

The Path to Suša theme path begins at the parking area at the entrance to the village. Although there are a couple of other paths that lead to the same destination, I recommend beginning here as there is ample parking and an information board with leaflets and brochures about the path and other sights of interest in the valley.

The path is very well marked throughout – in places with theme path signs, and/or with yellow circles painted on trees, rocks etc.

It only takes around half-an-hour to reach the church and there’s plenty to see along the way!

You can also see one of the many preserved bunkers of the Rupnik line that are dotted around the area – more about which you can read in a previous blog post here – https://adeleinslovenia.com/2017/08/06/a-recce-of-the-rupnik-line/

The pleasant forest path leads over ‘Galetove lajte’ to the pilgrimage Church of Our Lady of Loreto in Suša, which was built in 1877 and is included in Ema’s Pilgrimage Route. According to tradition, the origins of the church are linked with miraculous events. Throughout the years, a lot of people have sought the help of Our Lady of Loreto in Suša and have had their wishes granted, as is witnessed by the many pictures of thanks that are hung in the church, and today the church is still a popular place for pilgrims and others to visit. 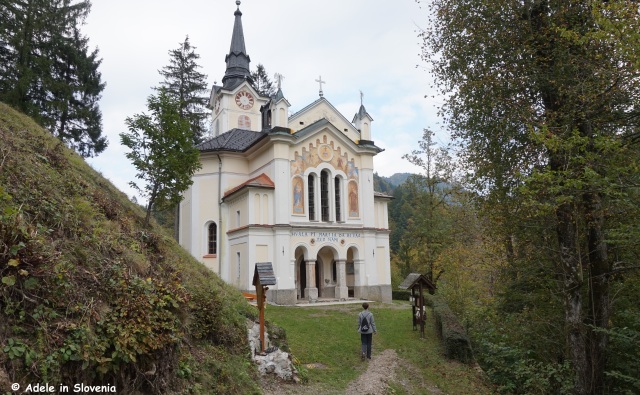 If you peer down over the forest at the back of the church you will see beneath it a chapel with the statue of the Virgin Mary. Within the chapel there is a rock under which a spring rises which, according to local tradition, has healing properties, as has been confirmed in numerous stories.

One such story goes that when a mother brought her blind daughter to the spring, after washing her eyes with the water from the spring, she was able to see. The speciality of the water is that it contains no bacteria, thus it can be stored for several months, or even longer, if stored in a clean air-tight container, and is still as fresh as the day it sprung!

Locals, and people from further afield, regularly come here to get water and to enjoy the peace and energy that is present. A local lady I met whilst there told me about one particular special stone which, apparently, if you stare at it, emits “special energy”. I can’t say I felt any different after staring at it, but who am I to question a theory that has stood the test of time!

Should you feel the need for some extra luck – and let’s face it, who among us doesn’t – you can ring the wishing bell!

You can download the theme path brochure and find out more on the Visit Škofja Loka website here – http://www.visitskofjaloka.si/en/experiences/theme-paths/path-to-susa

2 thoughts on “Zali Log and the Path to Suša: Miraculous Wonders and Water”