Summer is well and truly here – hooray! And with it come numerous fairs, festivals and other outdoors events, as well as myriad opportunities for hiking, cycling, swimming and enjoying the great outdoors.

I had a pretty active weekend myself. On Saturday I went by bike from Radovljica to Bohinjska Bela, the other side of Bled, from where I then hiked up to Galetovec, beginning at the climbing area by the Iglica waterfall. You can read more about hiking to Galetovec in this previous post – http://bit.ly/1HHmigK

On Sunday I went by bike through the Radovna valley, which is always the place I head to bike when the heat is on as the cycle path leads mostly alongside the Radovna river and in the cool of the forest beneath the Mežakla and Pokljuka plateaus. I returned on the D2 cycle path from Mojstrana to Jesenice, and then by road back to Radovljica. You can read more about cycling in Radovna in this previous post –  http://bit.ly/1NL6B9f 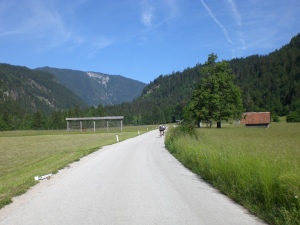 Other than that I was keeping cool in the shade of the forest, which isn’t hard to do when Slovenia is 60% covered by forest. I even got lucky and found my first mushrooms of the year which were delicious cooked up with chard from my vegetable plot!

On Saturday it was also the annual Blacksmiths Festival (Kovaški smaren) in the village of Kropa, the cradle of Slovene iron-forging. The village, which sits snugly at the far eastern edge of the Jelovica plateau, is crammed with interesting sights and architecture and preserved technical heritage which is showcased during the annual festival. There were demonstrations of hand forging of nails in the Vigenjc Vice Blacksmiths Museum, a small handicraft market, old-time bikes, open days at the Blacksmiths Museum and the Fovšaritnica Museum House, as well as at the headquarters of UKO Kropa, which is keeping the iron-forging tradition alive in Kropa and specialise in all manner of wrought iron furnishings and fittings. 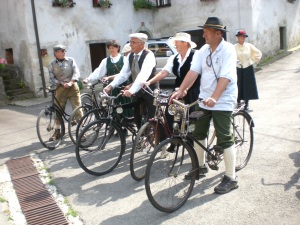 Kropa is one of the destinations that can be visited on the Hop-On Hop-Off tourist bus which is now operating. The bus visits Kropa on Tuesdays on the route which also includes Bled, Radovljica and Kamna Gorica. As the name implies, you can get on and off the bus at the various place along the route and either wander at your own leisure or participate in one of the guided tours. The bus also runs on Thursdays additionally to Begunje and Brezje, and at weekends to Triglav National Park. More information can be found here – http://www.radolca.si/en/hop-on-hop-off-radolca/

The nation was saddened by the news of the death last week of the legendary Slavko Avsenik, the founder of Slovene national folk music. The music of the Avsenik brothers is popular worldwide, particularly in neighbouring European countries, but also farther afield. The family home, and venue for the Avsenik Festival, regular concerts, gallery and museum, is at Pr’Jožovcu in Begunje na Gorenjskem. To date they have produced over 1000 songs, which are now being performed by younger generations of the family, so there is no doubt that his music will live on forever.