I attended the festival and managed to dodge (most of !) the afternoon showers which are so often a feature at this time of year. And the spirits of all the dancers, actors, stallholders, and other performers and guests weren’t dampened either!

Below you can see some of the highlights of the festival, as well as see more of this charming town on the Sora river which should be on your list of places to visit whilst in Slovenia.

The fair and the majority of events took place in the main town square (Mestni trg) where visitors  had a chance to try some typical dishes from the area, part of the Taste of the Škofja Loka Countryside project (Okusi loškega podeželja). 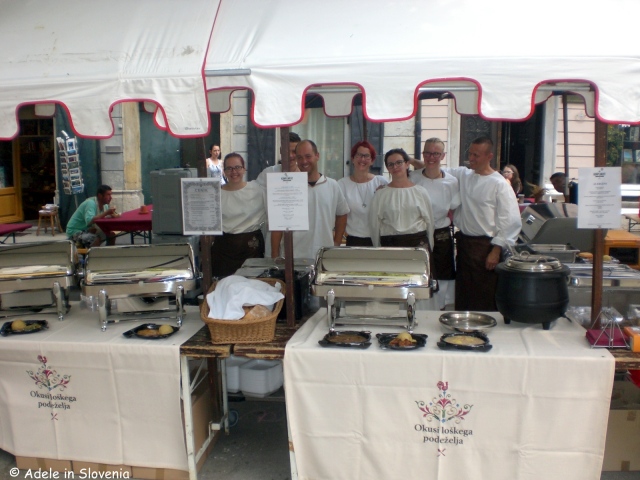 One of the foods most synonymous with this area is Visoška pečenka – roast pork from nearby Visoko, studded with carrots, lemon, parsley garlic and laurel.

On the main stage there were performances from, amongst others, the Lonca Dance Society performing historic dances.

A display of flag throwing and sword play was performed by the Taboršti Kupci historic group from the twin town of Tabor in Southern Bohemia. 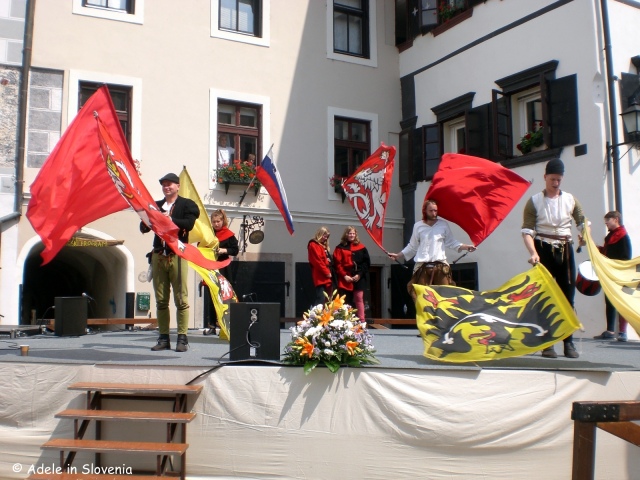 They certainly weren’t just play fighting! It was pretty brutal, raw fighting which, in addition to swordplay, seemed to involve a lot of bashing each other over the head with (real!) hammers!

In Rotovž, the former town hall building and one of the most prominent buildings in the square with its baroque frescoes and three-storey gothic arcaded courtyard, the main event took place at intervals throughout the day. The drama ‘The Devil’s Footbridge’ (Hudičev brv) tells the story of the devil, the Puštal frogmen and a stone bridge. 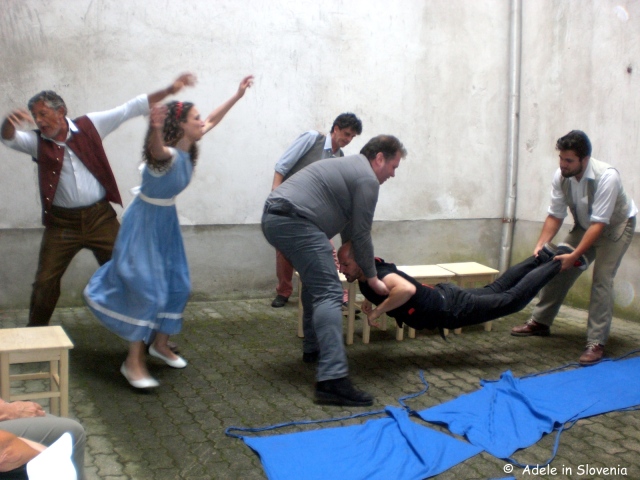 From the main square, I headed down through the narrow streets and alleys to the other main town square, Lower Square (Spodnji trg) where there were also various workshops and performances.

Next it was up to Loka Castle and the 16th century Škopar’s House (Škoparjeva hisa) where I had a chance to sample Loška medla, cooked in the original black kitchen; a simple peasant-style dish made of cooked millet which, according to some sources, originates from the Škofja Loka area. 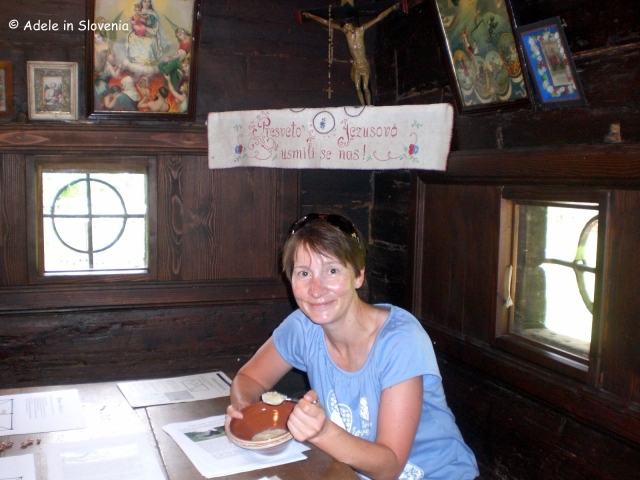 Outside the house there were workshops and puppet shows for children, as well as weaving workshops. Unfortunately I haven’t got so much as a creative bone in my body when it comes to such things, but I’m always willing to give them a try! Weaving on a loom and using a weaving board; the latter, as I discovered, also requires a fair bit of patience!

Even when there aren’t any particular events happening in the town itself, there’s no shortage of things to see and do in and around it, as well as further afield in the Selca and Poljana valleys, about which I’ve already written quite a bit this year, but I’m certainly not finished yet!

And there’s no need to wait until next year’s Historial if you’d like to try your hand at some traditional handicrafts as this can be done all-year round at the DUO Arts and Crafts Centre (more here https://adeleinslovenia.com/2017/01/13/loka-honey-breads-and-handicrafts-at-the-duo-arts-crafts-centre/); you could also take a guided tour of the town to find out more about its history and listen to some of the many local legends, try some of the suggested experiences, or explore the pristine countryside on foot or by bike. More about all this can be found on the Visit Škofja Loka website – http://www.visitskofjaloka.si/en/

2 thoughts on “Highlights of the Škofja Loka Historial 2017”