This ‘summer’ – not that it can really be called that thus far – hasn’t been kind to us outdoor types. This time last year we were basking in 35 degrees, whilst a week ago we had temperatures half that, and since the start of June there have only been a couple of days when there hasn’t been rain somewhere in Slovenia.

Thus, trying to find days with clear blue skies for hiking and getting some good snaps for my blog have been few and far between. Fed up with waiting, I just went anyway, and, though not as gloriously sunny as I would have liked, I managed to get in a good hike in the Karavanke mountains to Srednji vrh and the Dom pri izviru Završnice (mountain hut at the source of the Završnica stream) – and even stayed dry too! 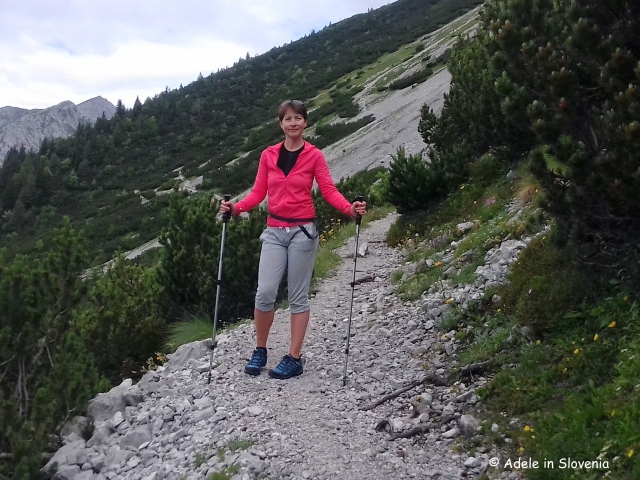 Despite the less sunny photos, I hope you, nonetheless, enjoy this glimpse into just one of the many fantastic hikes in the Karavanke mountains in the Žirovnica area. Join me on my trip to see the source of the Završnica stream and Srednji vrh!

I started my hike from the Završnica valley. How far you go by car is a matter of choice – some choose to drive as far as possible along the valley, whilst I prefer to leave the car and set off on foot along the gravel road. You will want to stop and admire the reservoir (seen below on a sunnier day!), but if you have transport, then do continue along the valley further before parking, as its a long walk from here. 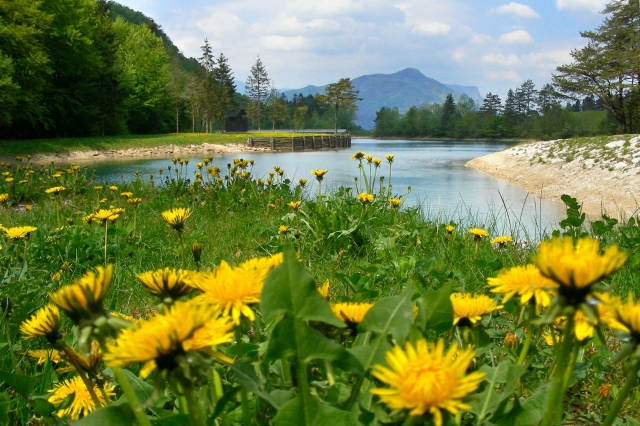 From here the road gets much rougher and it’s best to set off on foot. The area, with its many mountain pastures, is also popular for mountain biking. 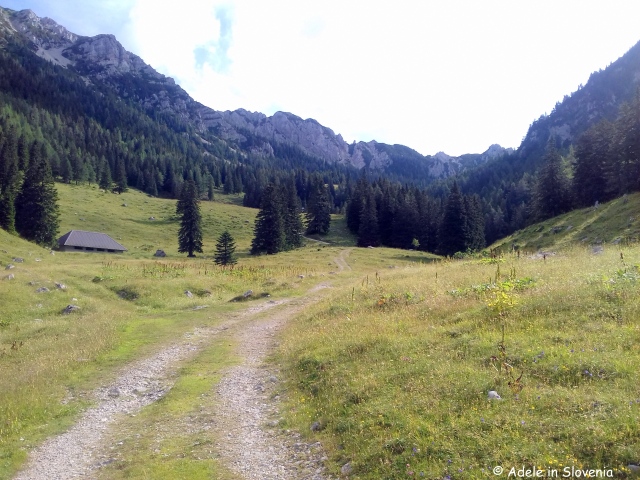 The road rises gradually to reach the Tinčkova koca hut, which isn’t actually an official mountain hut, rather a private hut, but somehow the name has stuck!

The Dom pri izviru Završnice hut. which was recently renovated and has new beds and furniture, is situated at an altitude of 1425m above the Smokuč mountain pasture (Smokuška planina) and on the backside of the Zelenica ski piste (sadly, no longer operational).

The hut is open from 1st June to 1st October, and at other times at weekends, weather permitting, and by prior arrangement for groups. From the hut there are numerous options for continuing to explore the peaks of the Karavanke including Vrtača, Begunščica and Stol.

I always find the springs of rivers and streams fascinating. Where on earth does all the water come from? At the source of the Završnica stream, there is barely a trickle of water to be seen – and that despite the abundance of snow and rain this year – yet just a little further down the valley, it turns into a gushing stream.

The beauty of hiking in the Karavanke, particularly in the ‘summer’ (ahem!), is the lack of crowds. I hiked for close to 5 hours and only met around a dozen people in that time – bliss for those who really want to get away from it all.

As I like to make my hikes circular, where possible, I continued from the hut up the ski slope before turning left and heading on the slopes beneath Vrtača. In this area there is a lot of loose rock and scree, so you need to keep your wits about you. As you get higher, you are rewarded with a glimpse of Lake Bled in the distance. 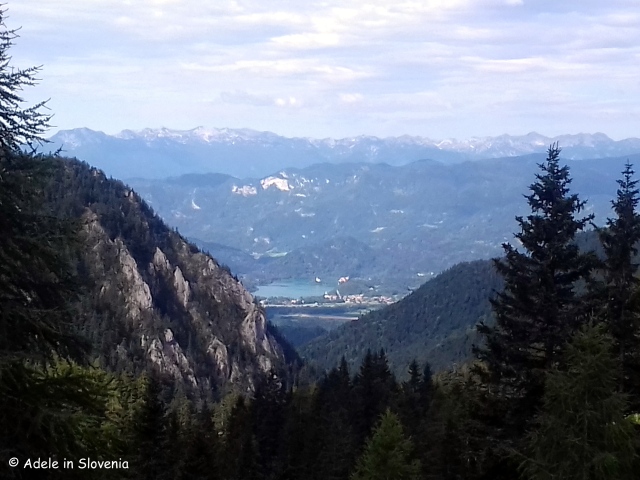 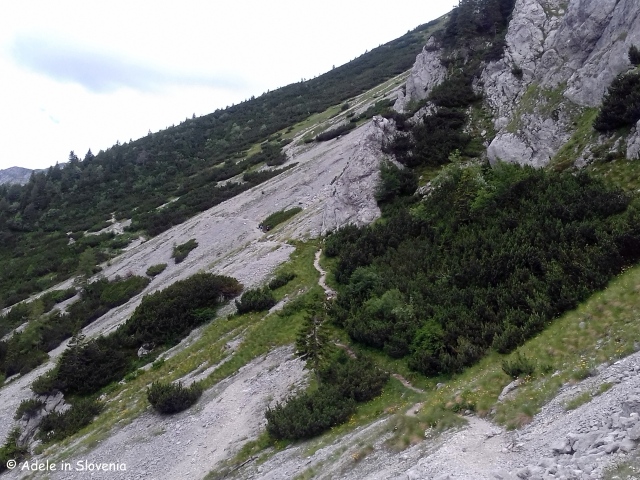 Where the path branches off right to ascend the summit of Vrtača, I took the left fork marked for Stol. On reaching a junction I then descend to the Šija saddle, from where there is certainly no lack of choice of where to go next!

I chose the path to Srednji vrh (1796m), which is just a further 15 minute climb from the saddle. At the top there is a visitors’ book, a solitary bench and fab views! 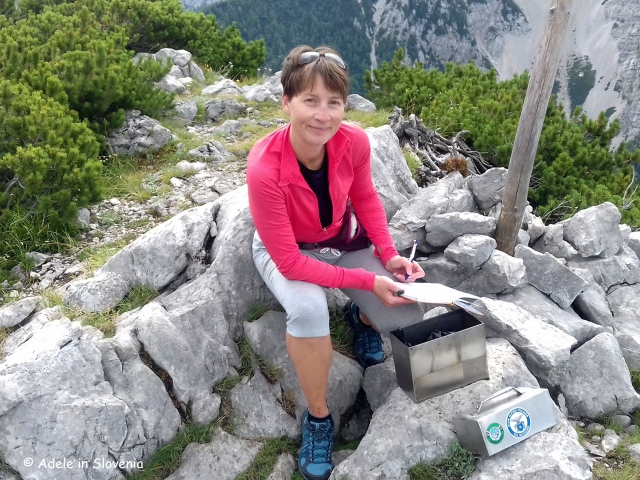 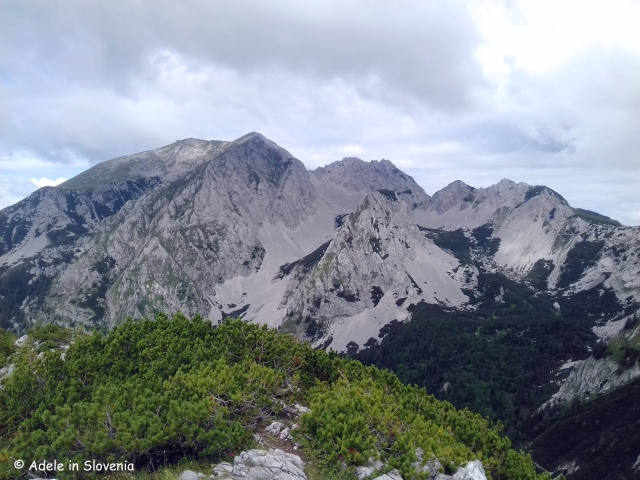 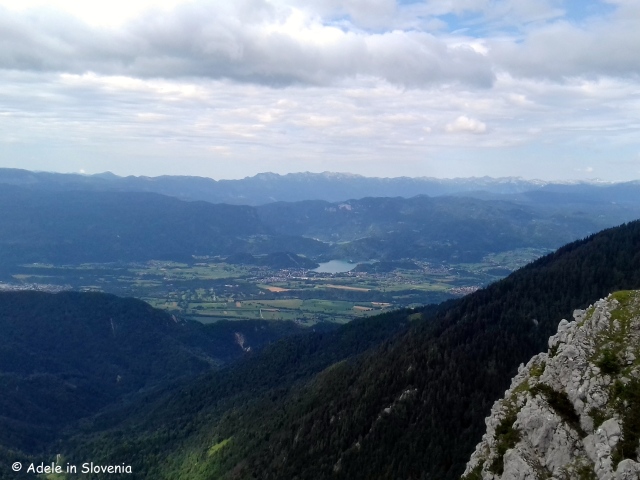 I then descended back down towards the hut, which is less than half-an-hour from the Šija saddle before returning on the same road. 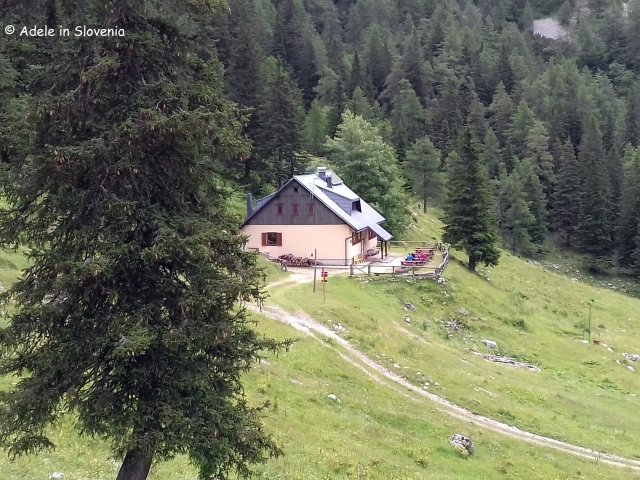 Click here for more information and this and other hikes in the Žirovnica area.

8 thoughts on “Srednji Vrh: Seeking the Sun and a Stream in the Karavanke!”