Providing the weather is good, autumn is one of the best times of the year for hiking in Slovenia; the weather is (usually) more stable i.e. there aren’t (usually!) late afternoon thunderstorms like in summer, and the trails are far less crowded than during the peak summer months. On the downside, the days are getting shorter and some of the mountain huts are already closed, with others only open at weekends, but provided you set off in good time and with proper equipment and a well-stocked rucksack, the hiking world – well Slovenia’s little part of it – is your oyster!

The Karavanke mountains above the Žirovnica area are a great destination for hiking year-round.

I have already written numerous blogs about my various hikes in the area, so this blog is a kind of ‘one-stop-shop’ where I have gathered together all, well far from all in truth, my hikes and blogs in the area, as well as a bonus one too!

The hikes listed below are all included in the leaflet ‘Žirovnica Green Energy – Hiking and Mountain Bike Trails in the Municipality of Žirovnica‘.

Valvasorjev dom (Valvasor mountain hut) is the three-times winner of the title ‘Best Mountain Hut in Slovenia’. It can be reached in around an hour from the reservoir in the Završnica valley. 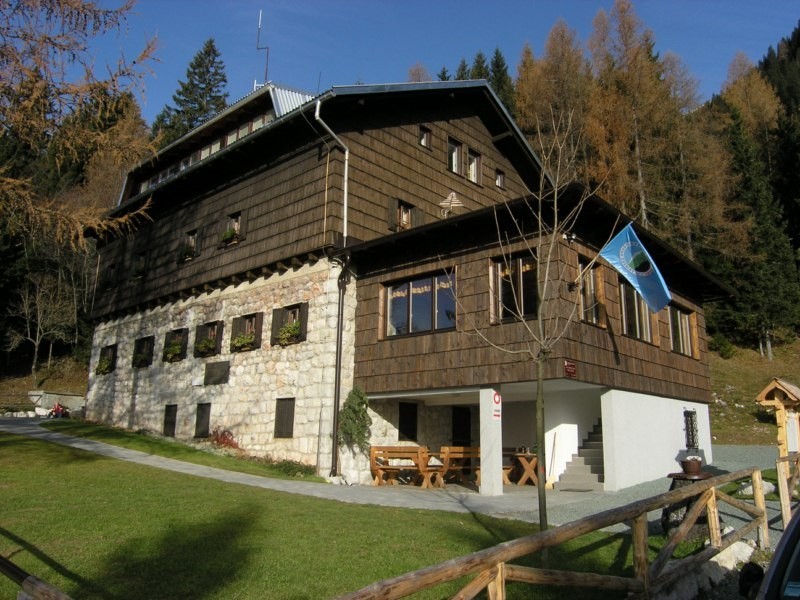 There are numerous onward trails from the hut, including to Stol, the highest peak in the Karavanke mountains.

Ajdna is the name of the tooth-shaped peak beneath Mount Stol and is home to a fascinating archaelogical site. It was settled during the crisis times of the collapse of the Western-Roman Empire in 476 AD. Extensive, expensive and exceptionally complex conservation work was carried out and today there are well-preserved buildings and remains of buildings that are thought to date back to the late Antiquity, though some evidence shows that it may even have been inhabited far earlier.

The numerous mountain pastures beneath Mt. Stol are ideal for those seeking easier, more level walks, and/or mountain bike enthusiasts.

I like to visit the Dom pri izviru Završnice (hut at the source of the Završnica stream) as part of a hike to Srednji vrh.

Starting from the Završnica valley, the trail passes the hut up to the Šija saddle, from where there is no lack of choice where to go next!

Stol is the highest mountain in the Karavanke range. As the Karavanke mountains form a natural border between Slovenian and Austria, you are spoilt for choice with fabulous views in all directions.

The word ‘stol’ means ‘chair’, hence once you are at the top, you are literally taking a seat atop the Karavanke!

The Turkish Cave (Turška jama) is located at an altitude of 835m above the Završnica valley. The name of the cave derives from when, many centuries ago, women and children retreated to the cave to seek refuge from Turkish invaders.

The cave has two entrances, is 18 metres long and 2 metres deep.

I have already written two blogs about Tito’s Village, offering two alternative ways to reach it. The first describes the route from the Završnica valley or, for a more adventurous approach, take the path along the ridge to Mali vrh and onwards to Tito’s village.

The camp provided partisans with shelter from the German occupiers. The camp was in existence from 21 November 1944 – 31 January 1945, which, though only 2 months, was considered long for those times.

And finally, the Hudič babo pere waterfall – the ‘bonus’ walk I mentioned earlier!

One does, however, need a sense of adventure to find this waterfall, not to mention good footwear! I visited in late summer, when water levels were low, but imagine that during autumn the flow of water is somewhat more impressive. You can reach it on foot from the Završnica valley. After around cca. 200 metres from the reservoir, just before a wooden fenced ‘bridge’, take the (unmarked) path to the left. It first crosses a stream over a wooden boardwalk then leads up steeply into the forest where the path almost disappears. Just keep following the water for a further cca.20 mins to reach the top – but please do so with extreme caution!

So, as you can see, there’s no shortage of choice. The hardest thing, as always, is deciding where to go first. Happy Hiking in Žirovnica!

6 thoughts on “Visit Žirovnica: Autumn Hikes in the Karavanke Mountains”