Brrr… it makes me shiver just thinking and writing about it but some hardy folk braved the ice cold waters of Lake Bled last week for the Bled Winter Swimming Cup 2013, which since starting in 2010, has now become an annual event – ice permitting.

The water temperature on the day of the swim was a balmy 3 degrees and the air temperature 0 degrees. The event attracted 67 competitors from far and wide: Australia, Croatia, Germany, Ireland, Portugal, Russia, UK, USA and of course Slovenia.

All the men’s events were won by Slovenes whilst the women’s events were won by a Slovene, a Germany and an Australian. The shortest event was 25 metres and the longest 50 metres. However, one brave chap, from England no less, where we’re not exactly famed for our tolerance to the extreme cold, then went on to swim the ice mile in 37.23 minutes, hats off all round to him I say!

This year, although there have been record levels of snowfall, the air temperature hasn’t actually been as low as last year and therefore, fortunately for the competitors, the lake hasn’t frozen over. This time last year it was completely frozen over with a very thick layer of ice and for the first time since moving here I was able to walk across the ice to the island and the church in the middle of the lake. What a strange and slightly unsettling experience (as you might gather from my facial expression in the photo below – that and the fact it was freeeeezing!). However, I certainly wasn’t alone, there were plenty of others walking and skating on the ice too so I decided to put my apprehensions aside and join them. And it was worth it for my first chance to reach and explore the tiny island and so I can finally say I’ve been there. 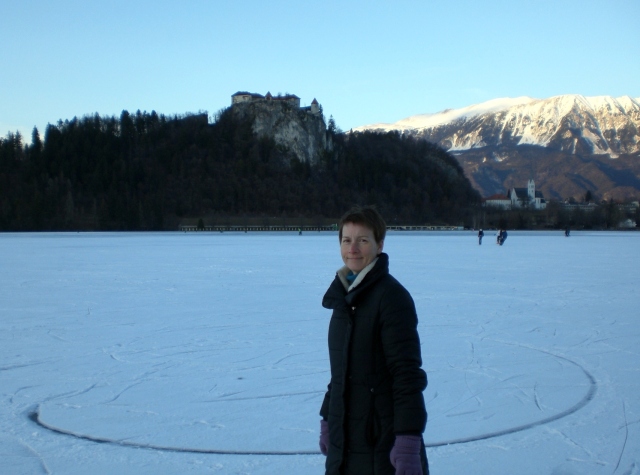 Fortunately, living in Radovljica, which is just 7km from Bled, I am able to walk and run frequently around Lake Bled – I couldn’t possibly count how many times I’ve done so in the past 6 years and it still hasn’t lost its appeal. Bled has been a popular tourist destination since the 19th century and is probably most known for its island in the middle of the lake, home to the Church of St. Mary which was originally built in the 8th century and renovated in the 15th and 18th centuries. The stairway which leads from the lake up to the island has 99 steps and dates from 1655. The island can only be reached by boat and visitors can either rent a boat and row themselves or use one of the traditional Bled ‘pletna’ boats whose oarsmen will do the hard work for you.

Alternatively, a walk, or even a run, around the lake as I do is a very popular activity year-round. It’s approximately 6km around but the time passes easily whilst admiring the beauty of the island, Bled Castle and the backdrop of the mountains of the Karavanke Alps.

Since I love being up in the mountains rather than just looking at them, and since Friday brought some much needed and long awaited warm sunshine, I went for a walk with a friend to the Roblek mountain hut (Roblekov dom) which at 1657m is the highest of the huts on Begunjščica, a part of the Karavanke Alps. It was so sunny and warm up there, we could have stayed all day, alas we had to get back so we’d didn’t have much time to linger but just long enough to feel some of the sun’s rays and take a few photos.

Roblekov dom is named after Hugon Roblek, who was born in Radovljica. He was a successful pharmacist and one of the fighters who defended the northern border in the Austrian Koroška region. In 1920, whilst staying in the National Home in Trieste, Italian fascists set fire to the home and Roblek fell to a sad death when trying to jump out of a window to save his life. In his will, Roblek left all his assets to the Radovljica branch of the Slovene Mountain Association who built Roblekov dom using his legacy. 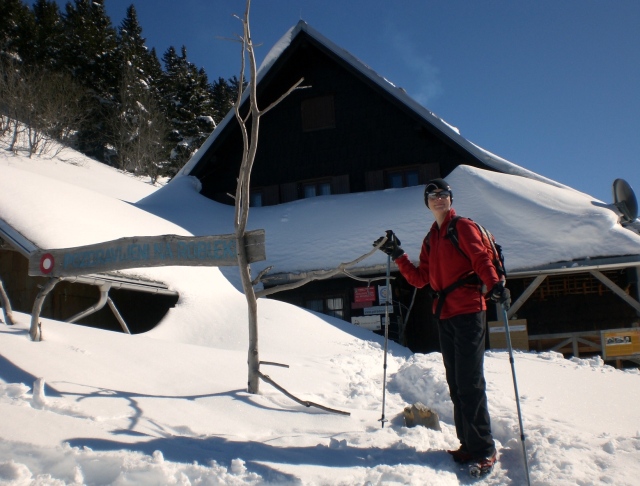