In addition to being home to one of the most beautiful and popular campsites in the whole country, Camping Šobec in Lesce, there is a wide range of camping and glamping facilities in the Radol’ca area, with more springing up by the year – just as well considering that these days, camping, and particularly glamping, is all the rage!

The forested Camping Šobec is situated next to the Sava river – Slovenia’s longest river – and features a natural lake, ideal for a refreshing dip on a hot summer’s day. During summer, day visitors to the camp can also use the facilities and swim in the lake (entrance fee payable during the peak tourist season).

If I didn’t live so close, I’d stay there myself as I love the place! 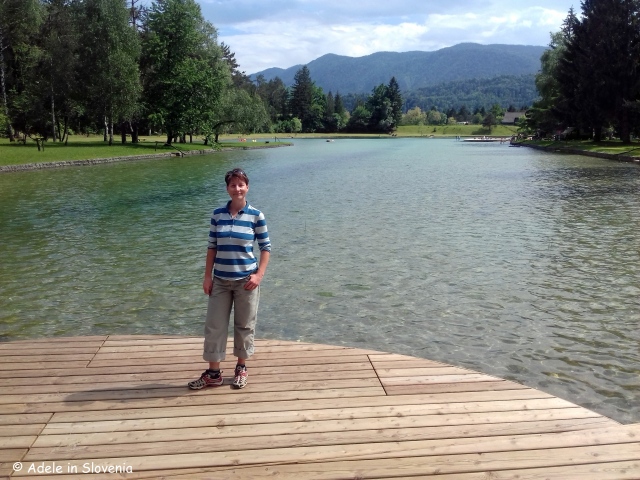 There are 400 camping spots available, as well as 10 timber chalets. 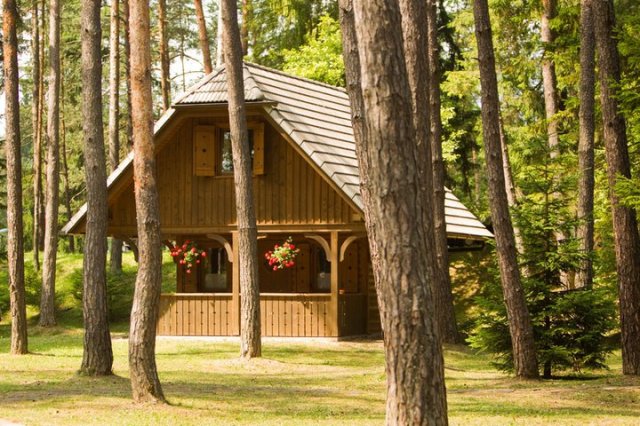 The newly-opened building combining a restaurant and supermarket is a great addition.

The camp also features mini-golf, tennis, Thai massage, children’s play areas, water games and more. Even when full, which it usually always is during summer, Camping Šobec offers a tranquil break in nature. There are also numerous walking and hiking trails accessible directly from the camp, including to Talež and along the Sava River Trail.

Fans of glamping are catered for at Pr’Matic in Kamna Gorica, where wooden cabins are situated on a peaceful, green meadow, and there is an outbuilding containing a shared bathroom, kitchen and dining area. There are currently three cabins, but I noticed earlier this week when I went for a stroll, a further two are being constructed and look near ready.

Camping Radovljica is located next to Radovljica’s olympic-size swimming pool and offers 80 camping spots. A big added bonus is free entrance to the swimming pool for those staying at the camp.

The Hribar Tourist Farm on the outskirts of Brezje features apartments, shared dormitories and a small camp site for those looking for a more ’boutique’, albeit basic, camping experience away from the crowds.

Click here for more information about the above and the full range of other accommodation – hotels, guest houses, tourist farms, private rooms, bed and breakfasts – available in the Radol’ca area.

But, as they say, ‘Don’t delay, book today!’ because, believe me, last year during the height of summer there was barely a room, a bed or a camping spot to be had in the area!

Allow me to start this week’s blog by giving myself a small pat on the back. Why? Well, because last Friday my blog achieved its 50,000th view – something I’m really rather proud of. Ok, granted, it’s not up there matching the figures of some of the world’s ‘supper bloggers’, some of whom probably achieve that many views in a day, but for somewhat lesser-known Slovenia, and little old humble me, I think/hope/believe it’s quite an achievement. The greatest number of readers are actually in Slovenia, as often Slovenes themselves tell me that they turn to my blog for ideas and inspiration; this is followed by readers from the UK, USA, Australia, Canada, Germany, Austria, the Netherlands…… and as far away as Bangladesh, Mongolia, Senegal, Ghana, Martinique and more; a total of 110 countries to date.

It’s now been 3 weeks since my fall and, hopefully, that means I’m at least halfway through the healing time. Unfortunately, the fresh, and heavy snowfall on Friday, and again on Sunday afternoon, meant that I couldn’t get out much at the weekend as I’m just too scared at the moment in case I fall on ice again, particularly as I currently only have one arm for balance.

As I was sitting watching the snowfall from my window on Friday, and the snow was growing higher by the minute, I was wondering what the actual record snowfall figures are for Slovenia and set about finding out. Here, instead of a blog about MY latest snowy adventures, are some rather fascinating Slovenia snowy facts and figures:

So, instead of being out there enjoying snowy hikes, I’m resigned to looking back wistfully at photos of previous ones and looking forward to future ones. With that in mind, and for those looking for somewhere to enjoy the snow, and/or those who are maybe thinking about a winter visit to Slovenia, I offer below a few ideas for some of my favourite winter hikes and other snowy activities in and around the Radovljica area:

There are also currently tracks prepared for cross-country skiing in Radovljica, behind the Spar supermarket, and in Kamna Gorica.

It should of course be remembered that during winter anyone visiting the mountains must be well-prepared, equipped, and experienced in such conditions. The current fresh snowfall means the risk of avalanches is high, currently level 4 out of 5 on the avalanche danger scale, and unless you are familiar with the terrain and the conditions its not recommended to take on anything too adventurous at this time of the year, hence I tend to stick to (relatively) easy and well-trodden routes.

You can also find out more about these destinations in previous posts by using this blog’s search facility (top right corner).

The week ahead looks like being snow all the way, so until next week……