The festive season is in full swing with the Christmas lights on and markets open in many of Slovenia’s towns and cities.

Even some of the smaller ones, such as Tržič, have joined in the festive spirit and, for the first time, the town had an official switching-on of its Christmas lights recently.

I went along to see the mayor light up the tree, and whilst there took the opportunity to go and see the Tekec nativity scene (Tekčeve jaslice).

There was a large turnout in the atrium of the old town centre, which was just as well so we could huddle together to keep warm!

I then made the short walk from the main atrium towards the town’s main church and to Cerkvena ulica 2 (No. 2 Church Street), which can be identified by a shooting star in the entrance porch – as seen below – to see the Tekec nativity scene! 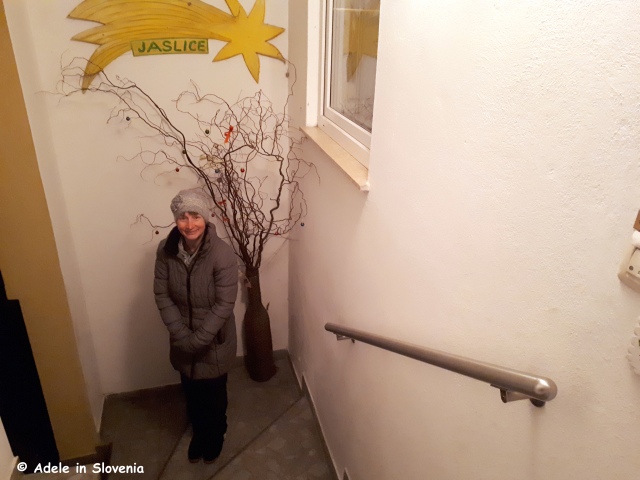 I have to say that, not really knowing what to expect, I was very pleasantly surprised. The name ‘Tekec’ comes from the name of the house in which it is situated – Pri Tekcu. The fact that it is hidden away in this house in Tržič is – in my opinion – both a marvellous bonus for the town and its people but also a crying shame, as it is such a wonderful scene that it deserves to be far more well known and appreciated.

So, for those of you visiting the area over the Christmas/New Year period, as well as those from Slovenia who haven’t yet been – whether young or old(er)! – I would urge you to go and take a look, as describing it here doesn’t do it justice, though I will give it a (brief) go!

Tržič was formerly known for its shoemaking tradition, and the nativity scene was made by the local shoemaker Jožef Ribnikar (1902 – 1970). He started carving the figures from linden wood using a cobbler’s knife when he was still a youth and began setting up the nativity with scenes from the birth of Jesus in 1935, adding the last figures in 1970. 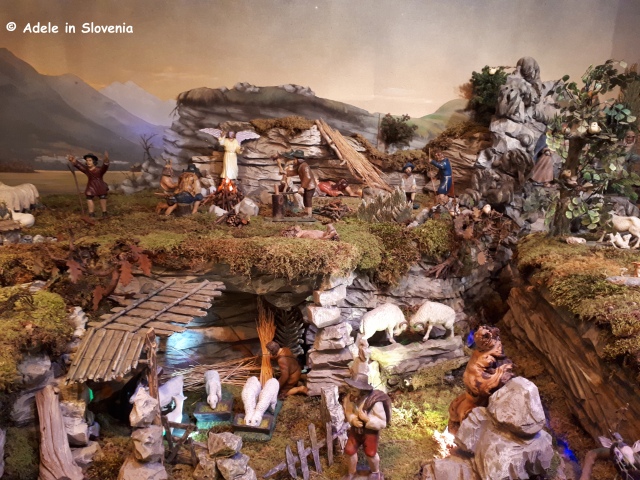 The amount of painstaking work that must have gone into making it is apparent in the detail; some of the figures even move. But you need to take your time to look at it and appreciate it, as there is far more than first meets the eye!

Nowadays Marjan Zupan, Jožef Ribnikar’s grandson, has taken over the reigns of maintaining the nativity scene, which is housed in the Ribnikar family gallery, and Marjan delights in proudly telling visitors about its history.

Whilst it is officially open daily from 25 December to 6 January from 9am – 7pm, provided you call or email in advance, visits can be arranged throughout the year by appointment. 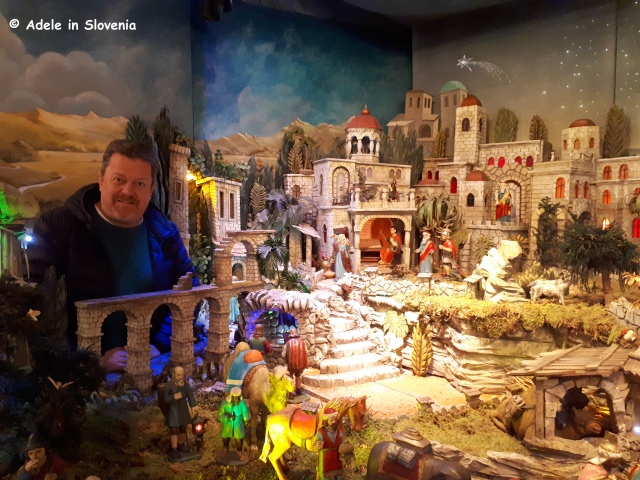 You could also perhaps coincide your visit to see the nativity scene with a visit to see a live nativity play in nearby Žiganja vas on 20th/21st December. The event revives old Christmas customs and Father Christmas will be there to delight children too. More information here (only in Slovene) – https://www.visit-trzic.com/prireditve/zive-jaslice.html

So, be sure to make a visit to Tržič part of your festive season and a very Happy Christmas to one and all!

This year I chose to spend New Year’s Eve (very) close to home at Kunstelj Inn in Radovljica, which is just walking (stumbling!) distance away! The family run Kunstelj Inn has a long tradition and is popular with both locals and visitors to Radovljica and is one of the participating Taste Radol’ca restaurants.

The New Year’s Eve menu consisted of a buffet of cold starters including these tasty cheese bite-pops, followed by a hot starter of pureed spinach and potato with egg. 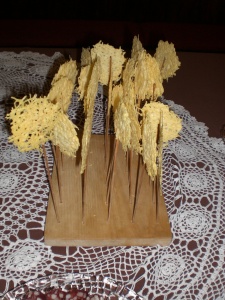 The main course included probably one of the tasty pieces of duck I’ve ever eaten. It literally fell of the bone and I have no idea how they got it that succulent. The only time I ever tried cooking duck I ended up smoking out the whole kitchen!

And the best bit, of course, the dessert buffet and home-made walnut potica. I was too stuffed to try it all – not like me I know – but took some potica home to try the next day, all in the name of research of course!!! 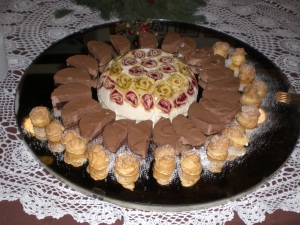 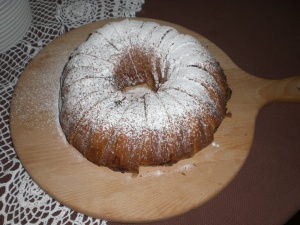 Meanwhile, in Radovljica’s old town crowds gathered to see in the New Year with live music from the Avsenik House Ensemble from Begunje na Gorenjskem.

Last week I visited the Dornk Excursion Farm (Izletniška kmetija Dornk) in Mlino to see the nativity scene exhibition and museum collection. Wow, this place is a goldmine, crammed to the rafters with every kind of collectable imaginable, and more! The nativity scene exhibition, housed in the stable (note – it’s not heated so wrap up well!), contains over 100 nativity scenes of various sizes and made from various materials. I was also shown around the over 240-year-old house, run by three generations of the family, which still retains its original features including a black kitchen.

The nativity exhibition is open for viewings daily from 12noon – 6pm until 6th January, then every weekend until the end of January, so there’s still plenty of time. The museum collection is also available to view year-round, by prior arrangement for groups. 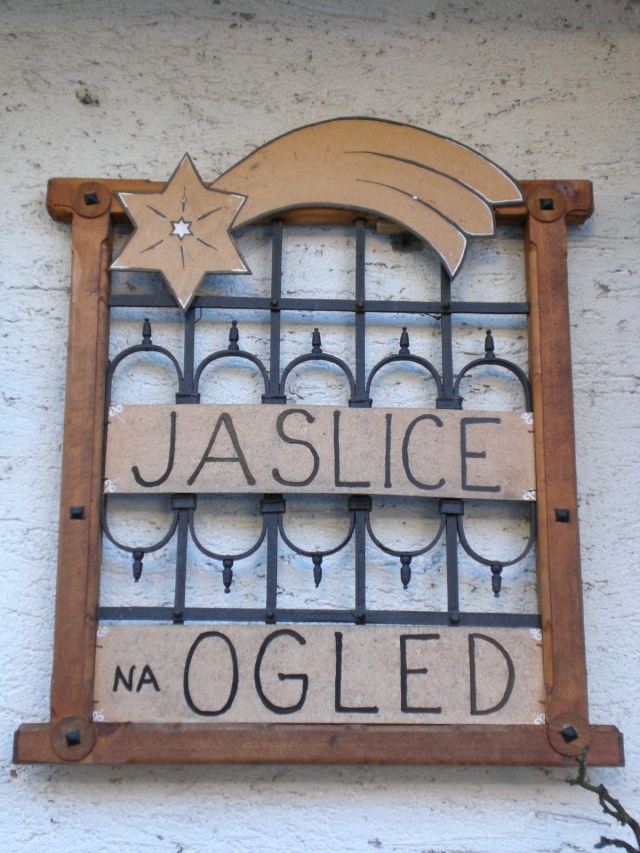 The other barn contains an extensive ethnological museum collection which also includes an amazing collection of handmade needlework – embroidery and crocheting – made by the family’s grandmother. 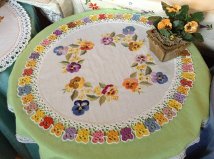 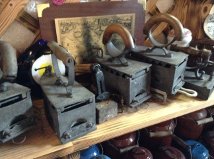 The farm has an extensive orchard and the owners prepare all their own juices, spirits, tea etc. which you can sample, as well as delicious homemade food such as potica, strudel etc. in the cosy snug. Find out more about Dornk here – http://dornk-bled.com/?page_id=325&lang=en

According to my annual report from the nice people at WordPress, where I host my blog, the number of readers of this blog in 2015 came from 123 countries around the world and equated to selling out 19 concerts at the Sydney Opera House – isn’t that an interesting fact! Thanks to each and every one of you!